1744 Bellin Map of the Mouth of the Mississippi River 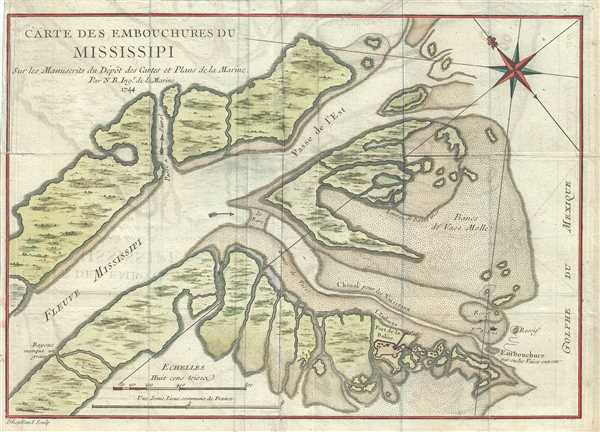 1744 Bellin Map of the Mouth of the Mississippi River

Early map showing the mouth of the Mississippi River.

This is a scarce 1744 map by Bellin depicting the mouth of the Mississippi River as it empties into the Gulf of Mexico. The map identifies Fort Balize, the first French fort and settlement in the region. Bellin also notes important coastal features including reefs banks, with beautifully rendered topography.

Bellin originally prepared this map to illustrate Pierre François Xavier de Charlevoix's Histoire et description generale de la Nouvelle France. It was engraved by Guillaume Dheulland. Charlevoix's history and this map in particular thus proved exceptionally influential as one of the most comprehensive works on North America predating the French and Indian War. Copies of the Histoire et description generale were to be found in the libraries of many 18th century luminaries, including Voltaire, Franklin, and Jefferson. Jefferson especially admired Charlevoix work, calling it 'a particularly useful species of reading' and no doubt influenced his decision to pursue the historic 1802 Louisiana Purchase, possibly the most significant event in the post-colonial history of North America.

Charlevoix, Pierre François Xavier de, Histoire et description generale de la Nouvelle France, avec le journal historique d'un voyage fait par ordre du roi dans l'Amerique septentrionnale, (Paris: Chez Rollin) 1744.     Bellin's Petit Atlas Maritime was a five volume atlas of all parts of the world published in Paris in 1764. The atlas is a combination of fresh material and previous issued Bellin maps. The breakdown of volumes is as follows: Volume I: North America and the Caribbean (102 Maps), Volume II: South America (89 maps), Volume III: Asia and Africa (127 maps), Volume IV: Europe (130 maps), and Volume V: France (132 maps), for a total of 580 maps and plans. This important atlas marked a major transition in European nautical mapping. It's significance is most accentuated by comparison to Bellin's other great atlas, L’Hydrographie Française, a large format work much akin to Dutch nautical atlases of the previous century. The Petit Atlas Maritime, on the other hand, was issued in a more compact format that allow for a diverse wealth of individual maps. Stylistically, it had more in common with European road atlases than with other nautical atlases of the period. As the largest collection of plans of harbors and nautical maps available at the time of publication, the Petite Atlas Maritime work proved popular with navigators and armchair adventurers alike. Its universal appeal gave rise to new convention in maritime mapping. The atlas was sponsored by the Duc de Choiseul. J. Arrivet is listed as engraver on the chart index pages, but there is a great likelihood he also engraved the maps and plans.