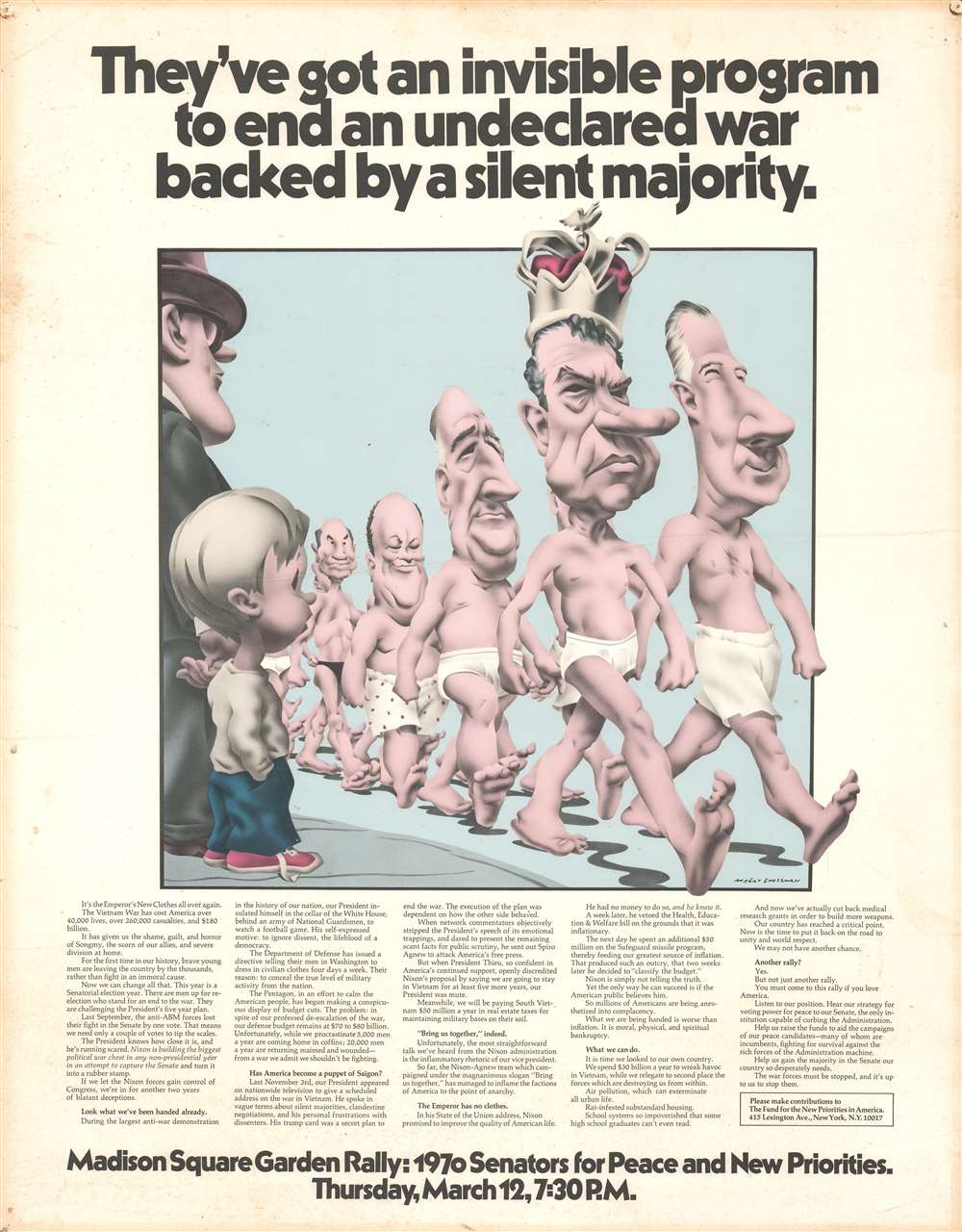 This is a 1970 Robert Grossman / Abie Sussman / Lloyd Fink and 'The Fund for New Priorities in America' anti-Vietnam-War protest broadside denouncing the lack of action by President Richard Nixon and the U.S. Senate. Entitled, They've got an invisible program to end an undeclared war backed by a silent majority, the broadside fires with 'both barrels' from the start. By using the phrases 'invisible program', 'undeclared war' and 'silent majority,' The Fund for New Priorities in America makes it clear they believe their government is purposely misleading the American people.

The Nixon administration first used the term 'silent majority' in May 1969, when Vice President Spiro T. Agnew stated, 'It is time for America's silent majority to stand up for its rights…'. Anti-war protests continued. After the first Moratorium to End the War in Vietnam demonstrations happened on October 15, 1969, and drew thousands of protesters, Nixon must have felt backed into a corner. On November 3, 1969, Nixon spoke on national television and outlined his 'plan to end the war' in Vietnam. At the end of the speech, Nixon implored the American people to support his policy of 'peace with honor' in Vietnam and stated that his plans would take time. He concluded,

And so tonight, to you, the great silent majority of my fellow Americans - I ask for your support. Let us be united for peace. Let us be united against defeat. Because let us understand: North Vietnam cannot defeat or humiliate the United States. Only Americans can do that.

The Fund for New Priorities in America uses the phrase 'The Emperor's New Clothes' to describe the Nixon administration's plans to end the war. In that story, written by Hans Christian Andersen, the emperor is approached by two swindlers that convince him they can make a suit out of fabric that appears invisible to those who are incompetent or stupid. The emperor's advisors, and even the emperor himself, periodically check on the garment's progress, only to find that no cloth is being woven on the looms. Instead of calling attention to this reality, they pretend to see the fabric not to appear ignorant or stupid. After the garment is declared finished, the emperor is 'dressed' and paraded through town. All the townspeople go along with the story of the 'emperor's new clothes,' except for a small boy, who declares that the emperor is wearing nothing at all.

Here, The Fund for New Priorities in America assumes the role of the young boy calling out the reality that none of the people in power (led by President Nixon himself - wearing an emperor's crown) have any intention of ending the war, even if they publicly state the opposite. The Madison Square Garden rally promoted here was meant to support anti-war candidates in the hope of electing enough of them to gain a majority in the Senate.

The Fund for New Priorities in America

The Fund for New Priorities in America was founded in 1969 by a group of liberal social activists, among whom were Maurice Paprin (who served as the organization's president for a number of years) and Eli Sagan. It appears that the organization is active today, but little information is available about its operations.

A Letter from the Maker

After we posted this initially, several months ago, we were thrilled to receive a letter from Abie Sussman, the designer. Here is what they had to say,

Hi Geographicus, I'm pleased that my poster is being recognized. I thought I'd add to your information. This poster was created by me and written by Lloyd Fink. The advertising (pro bono) was Calderhead Jackson. To fill out the story, I was 22 or 23 years old fresh out of SVA when a colleague asked me to meet with an anti-war group. Being a brash child I of course said yes. They told me their plan for holding a rally in MSG [Madison Square Garden] to get money for Senators against the war. I finally realized the enormity of the task and told them they needed Doyle, Dane, Bernbach and I would look up the number for them. They said they'd already done that and wanted to try something new. Rather than soil myself, I went to a recently opened Agency owned by one of my teachers (Dick Calderhead and Dick Jackson) and asked them if they would take it on as a pro bono account. Under their supervision, Lloyd Fink (writer), I (art director), and Avi Fink (also an art director and my friend who worked there) sat down and created this poster. I then called Bob Grossman whose work I admired from New York Magazine and asked him if he would do the illustration. We stayed friends until his death. Side note; in the original illustration Nixon, Agnew, Laird, Mitchell, Thurmond, were nude. The NY Times wouldn't run the page unless we dressed them. We even had to negotiate the dots on the boxer shorts.

This broadside was created for The Fund for New Priorities in America and features a cartoon by Robert Grossman. We have located two examples in institutional collections. One is part of the collection at the Library of Congress, and the other is part of the Spock War Posters Collection at Syracuse University.

Robert Grossman (March 1, 1940 - March 15, 2018) was an American author, illustrator, filmmaker, comics artist, sculptor and painter, whose work appeared on the cover of magazines over 500 times. Among these included Rolling Stone, Esquire, The Nation, TIME, Newsweek, National Lampoon, and the New York Times. Born in Brooklyn, New York, Grossman's father, a display artist, provided his earliest art instruction, and then sent him to the Museum of Modern Art for Saturday morning art classes as he got older. Grossman graduated from Midwood High School in 1957 and graduated from Yale University with a Bachelor of Arts in Fine Arts in 1961. While at Yale, Grossmen served as an illustrator, cartoonist, and editor of The Yale Record. A parody of The New Yorker entitled The Yew Norker produced by The Yale Record earned Grossman an introduction to New Yorker art director Jim Geraghty, who hired Grossman as an art editor. Grossman began his freelance illustration career in 1963. His most recognizable work is, perhaps, the knotted jet from the 'AIRPLANE!' movie poster. Grossman also had a short career as a fold singer and released an album entitled Cosmo Alley Presents Bob Grossman. Learn More...