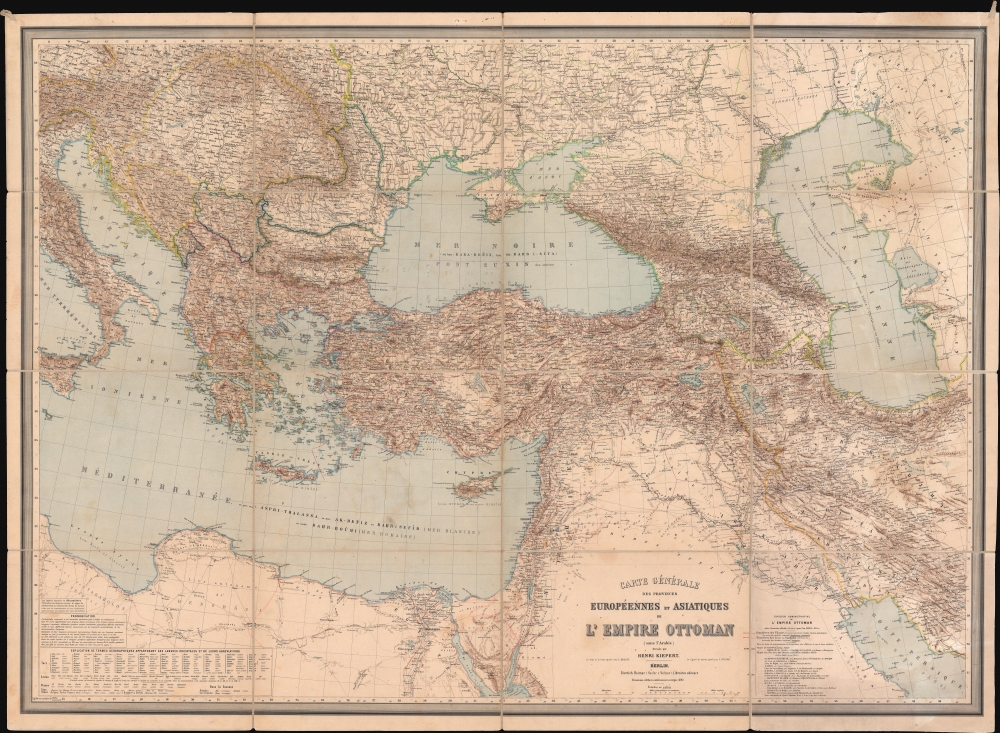 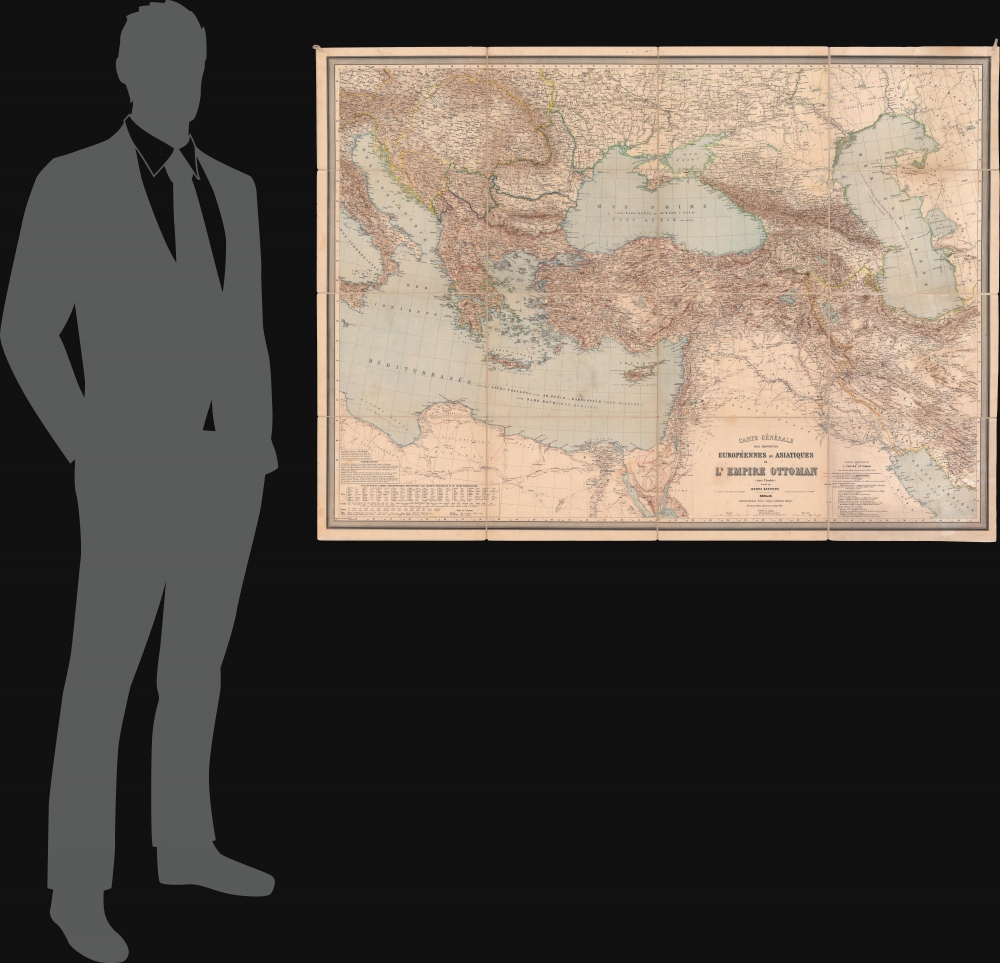 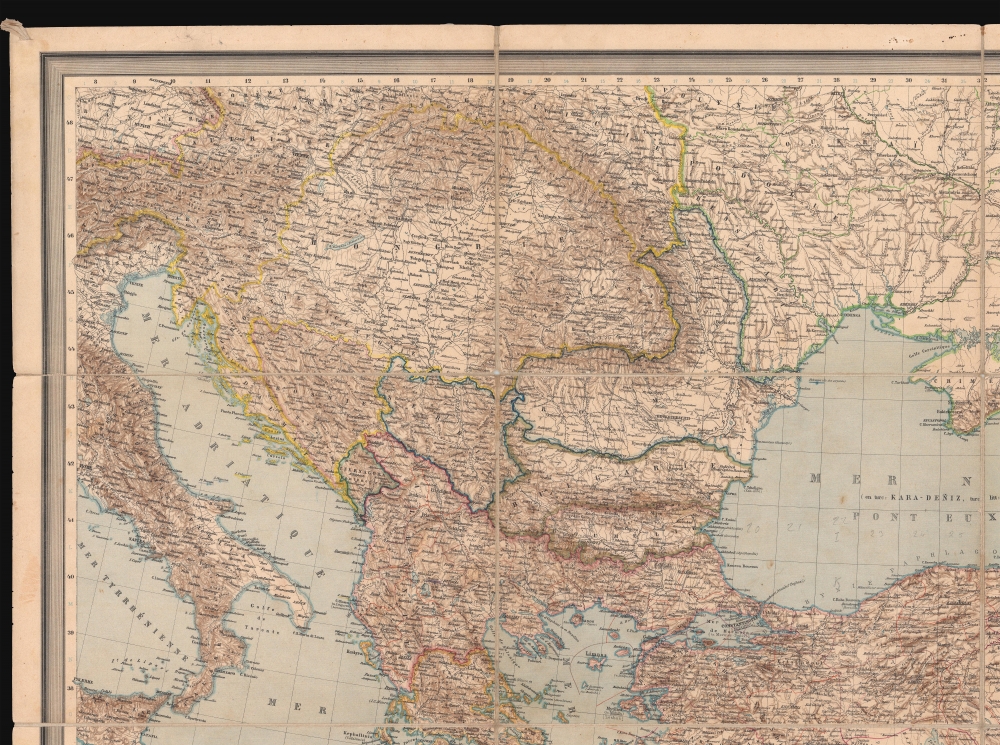 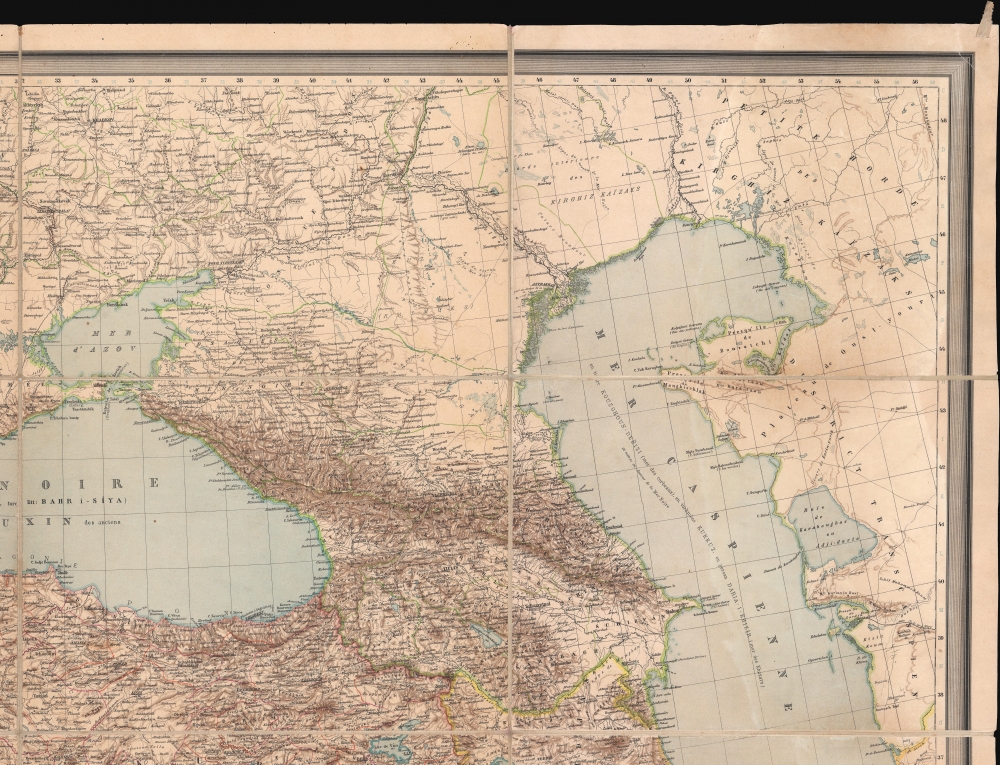 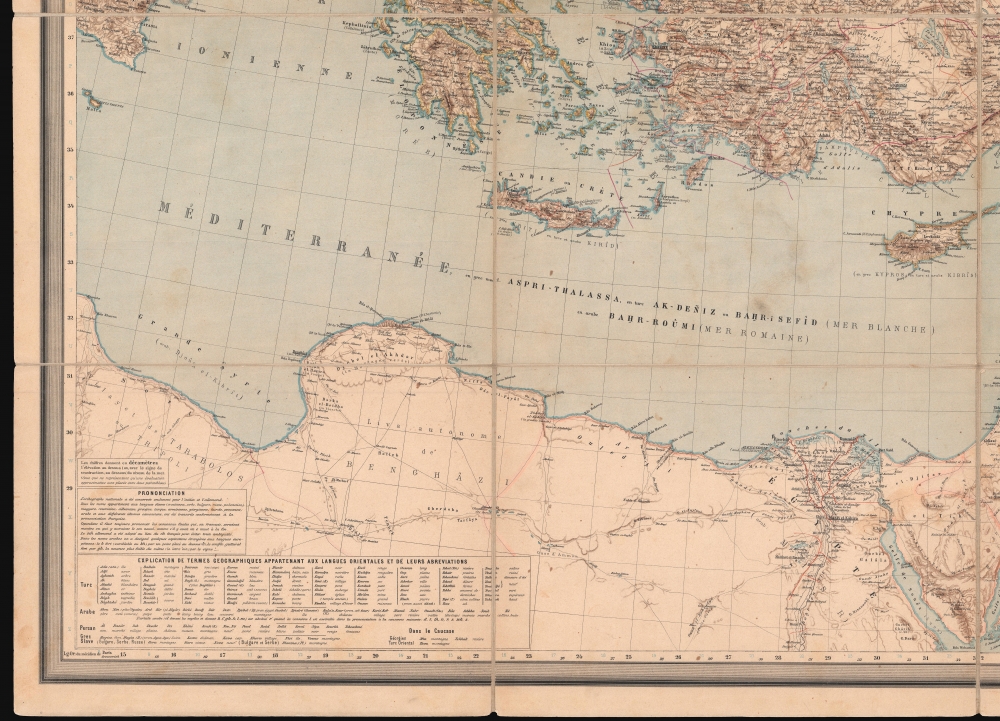 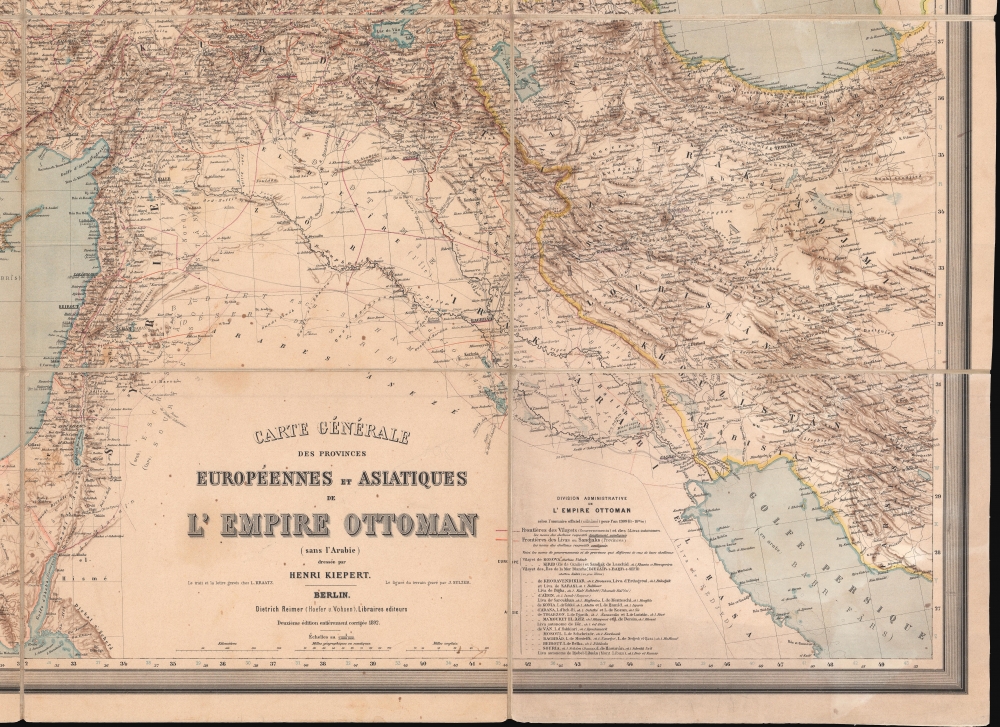 This is an 1892 Heinrich Kiepert wall map of the Ottoman Empire. The work of Europe's finest cartographer, this is without question the best large scale general map of the Ottoman dominions to appear in the 19th century. Centered roughly on modern day Ankara, coverage extends from Rome east to the Caspian Sea, Tehran, and the Persian Gulf, including all of the Balkans, the Black Sea, Anatolia, and the Middle East (with the exception of Arabia); and north Africa as far west as Misrata, Libya. The Bosporus, Strait of Marmara, and the Suez Canal (Canal des deux mers) are illustrated. A table in the lower right details the administrative divisions within the Ottoman Empire. Another table, in the lower left, translates Turkish, Persian, Arabic, and Greek, and Slavic geographic terminology into French.

Crises in the Balkans and the Ottoman Empire

Kiepert produced this map to capitalize on wider European interest in a region known for instability and war. From the 16th through 20th centuries, multiple Russo-Turkish Wars pit the declining Ottoman hegemony against nascent Russia. Larger war led to a host of lesser conflicts and independence movements throughout the Balkans. Between the 1820s and the 1890s, the Ottomans faced uprisings in Greece, Romania, Serbia, Montenegro, Bulgaria, and Bosnia and Herzegovina. By the late 19th century much of the Balkan region had gained either partial autonomy or outright independence. Sensing weakness, western European powers, including Austria-Hungary, France, Great Britain, and Germany gobbled up ill-defended territory: Austria-Hungary occupied Bosnia and Herzegovina, and Great Britain acquired Cyprus.

This map was created and published by Heinrich Kiepert in Berlin in 1892. Longitude and latitude lines, as well as the lettering, were engraved by Leopold Kraatz. The topography was engraved by J. Sulzer. The present example bears a paste down on the verso from the 'Librairie S. H. Weiss' in Constantinople, which was apparently just across the street from the Russian Consulate. Per a citation in the 1892 edition of the Beliner Titeldrucke, this map represents the fourth editions of Kiepert's Carte Générale de l'Empire Ottoman en Europe et en Asie and the second 'fully corrected' edition. At least one further edition was published posthumously in 1902. Ten examples of the present edition are cataloged in OCLC across two entries and are part of the institutional collections at the University of Chicago, the University of California Berkeley, the Bibliothèque nationale de France, and the Library University of Amsterdam.


Leopold Kraatz (18xx - 19xx) was a German lithographer, engraver, and printer active in Berlin Germany during the late 19th and early 20th centuries. Kraatz worked with Lange in 1854 and Kiepert from 1860 until 1888. Learn More...