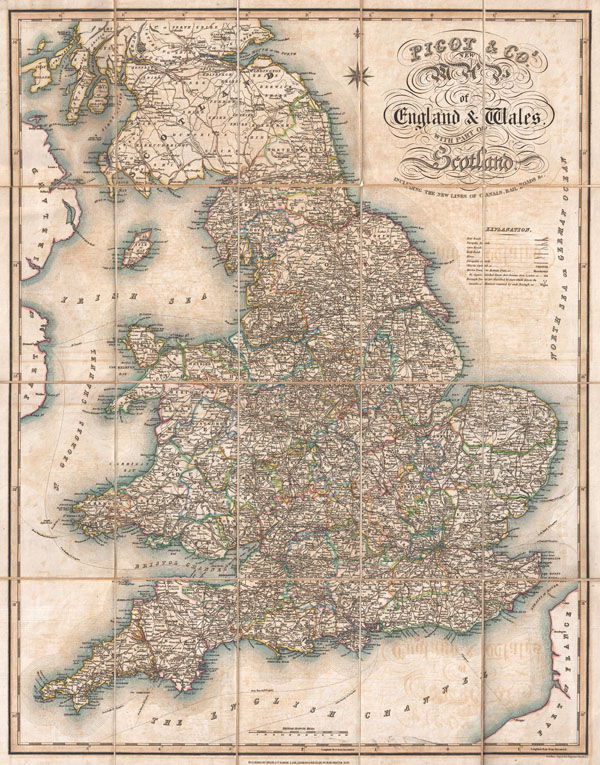 An extremely attractive 1830 pocket format map of England, Wales, and part of Scotland issued by James Pigot & Sons. Offers extraordinary detail through noting towns, cities, large estates, canals, railroad lines, and ferries. Highly decorative title area in the upper right quadrant. Pigot's map seems to be based on the work of Cary, which he reduced and updated for this 1830 publication.

James Pigot (fl. 1795 - 1843) was a London based map engraver and map publisher active in the late 19th and early 19th century. Stylistically Pigot's work resembles that of Cary, Thomson, and Pinkerton, though he was far less prolific. The first reference to Pigot is in a 1794 business directory of Manchester, England , where he is listed as an engraver. In 1804 he published a map for Dean's Manchester Directory. Dean must have inspired him for around 1811 he established his own directory, Pigot's Directory, which competed with the Dean Directory until about 1813 when the rivals seem to have merged. Pigot eventually moved to London where he established himself on Basing Lane. There in 1823 he published his first London Directory. Around 1830 his son joined him in the business and it was renamed Pigot & Sons - though the later seems to have little serious interest in the business. In 1939 Pigot partnered with his apprentice, Isaac Slater (1803 - 1883), renaming the firm Pigot & Slater and relocating to more prestigious offices at 59 Fleet Street, London ( though they maintained their offices at 18 Fountain Street, Manchester). Pigot died in 1843 though Slater and his son J. W. Slater continued to operate under the Pigot & Slater name until the firm was acquired by Kelly & Co. in 1892. Learn More...

Very good condition. Minor wear and splitting of the original linen. Some offsetting. Else very nice.
Looking for a high-resolution scan of this?