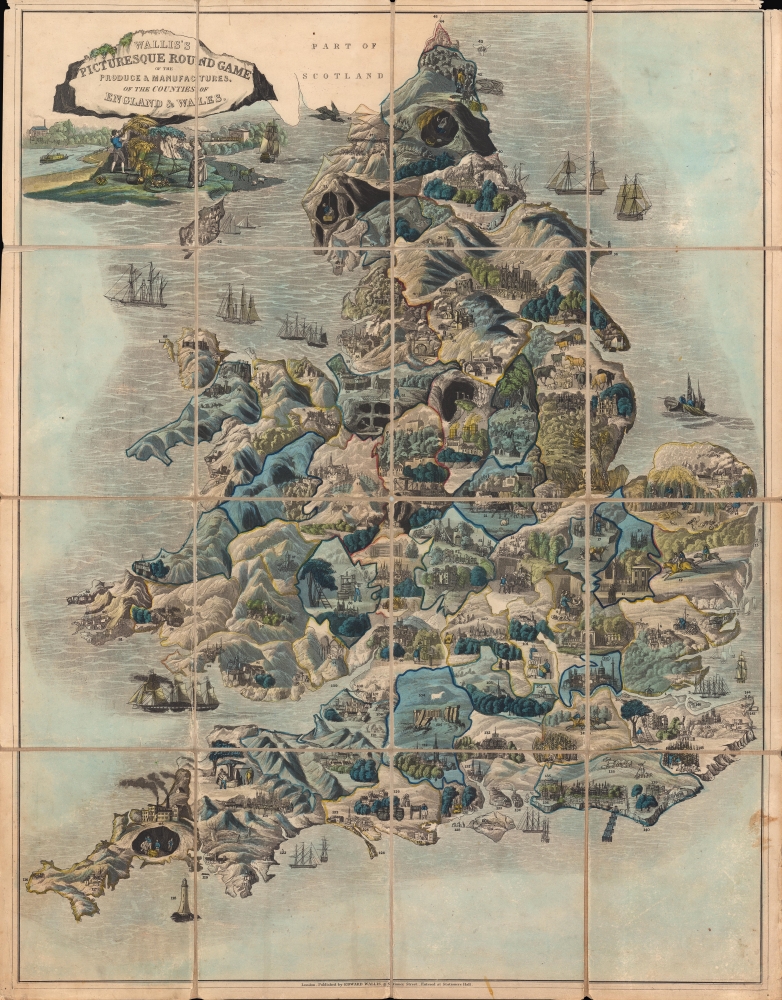 A fine example of this colorful c. 1830 table game map of England and Wales, filled with vignette illustrations. A race game with the added benefit of teaching children geography, this map represents each county in England and Wales.

Lovely hand-colored depictions of all the counties in England and Wales are included, with vignettes relating to local industries or famous landmarks, such as cathedrals, Cambridge and Oxford Universities, and Stonehenge. The prevalence of mines, the presence of some factories, and the inclusion of a wide variety of mechanical apparatuses gives a sense of the state of the Industrial Revolution at this time, just on the cusp of the railway revolution. In fact, an early steam engine appears in the illustrations just below the title, perhaps a representation of the Liverpool and Manchester Railway, opened in 1830, the first modern commercial intercity railway using steam-powered engines.

A race game, players begin at the mouth of the Thames east of London and the game ends when one player reaches the capital. Rather than rolling dice, the game involved a somewhat complex system of drawing numbers from a bag and adding them sequentially until one player reached 151.

Given that multiple undated editions of this game map were produced, catalog listings vary widely, making a true census difficult to establish. The railway illustration mentioned above suggests a date of 1830 or later, while the absence of depictions of natural disasters that appeared in later editions of the map indicate a date before 1840. The OCLC contains eleven listings for a map with this title, with dates ranging from 1795 into the 1850s. All told, including catalog listings not in the OCLC, some twenty institutions in North America and the United Kingdom hold an edition of this map.

John Wallis (1745 - 1818) was a London map seller, publisher, and maker of puzzles and board games active in the late 18th and early 19th centuries. Wallis studied mapmaking under the stationer William Johnson, with home he was apprenticed from about 1769. Upon his release from apprenticeship he partnered with one "Stonehouse" to found the short lived imprint "Wallis and Stonehouse". The firm lasted but two years before Wallis declared bankruptcy in 1778. Wallis subsequently started another independent firm specializing in children's books, games, and puzzles. In advertising ephemera issued c. 1812, Wallis claims, falsely, to have invented the puzzle map (this honor in fact goes to either John Bowles (1759) or John Spilsbury (1767). In 1813 he partnered with his son, Edward Wallis, to found Wallis and Son, which proved, primarily under Edward's management, exceptionally successful. Wallis's cartographic corpus is significant, including many important Revolutionary War ears maps of the Americas, as well as various pocket and dissected maps of London, Westminster, and environs. Upon his death, Wallis passed his business on to his sons, Edward Wallis and John Wallis, who operated separate but successful firms. The Edward Wallis firm is considered the direct successor to John Wallis, and the John Wallis II firm a new and completely separate establishment. Learn More...

Very good. Dissected and laid on linen. Areas of loss at upper corners and along edge of fold lines. Small are of loss at central fold intersection. Faint hand-written annotation noting location of Ripon.
Looking for a high-resolution scan of this?