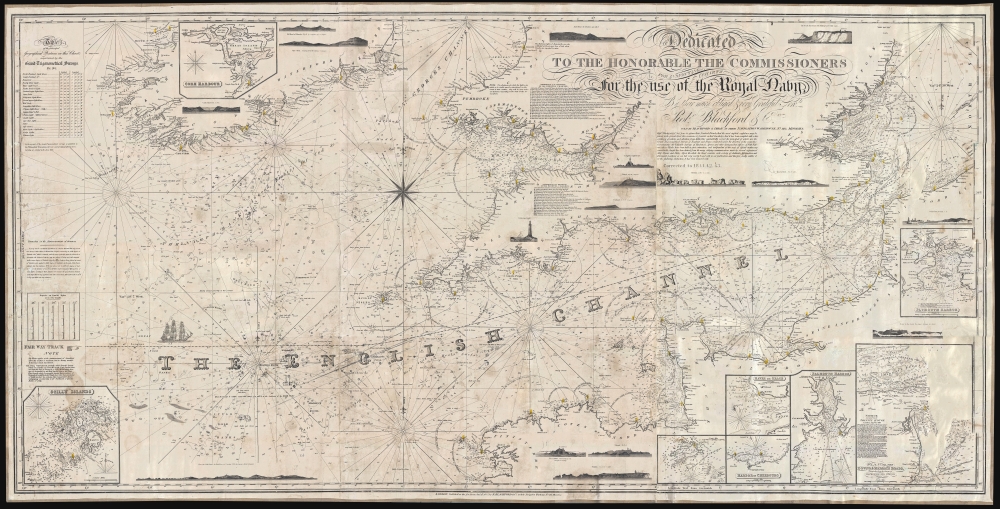 A stunning, enormous, and rare 1853 maritime map or nautical chart of the English Channel by Robert Blachford, considered by some to be the father of the Blueback Chart. Centered on the English Channel, the map covers from western Ireland to the French coastline and from St. Georges Channel to Brest. The body of southern England is filled with profile sketches of important ports and dangerous passages. In addition, the areas of visibility are for most important lighthouses and lightships are shown. There are several smaller submaps detailing important harbors, including Ushant, Havre de Grace, Cherbourg, Falmouth, Downs and Margate, Plymouth, Cork, and the Silly Islands. The chart exhibits copious pencil annotations throughout, illustrating that this was working sea chart used shipboard. The present chart exhibits the classic highly embellished style the make early blueback charts so highly desirable.

This map was first issued in 1835, with updates published in 1841, 42, and 43. The OCLC lists another chart of the same name dated 1827, but this may be a different chart, as we have not been able to acquire an image. Verified examples of this chart are located at only the Library of Congress and at U.C. Berkeley.