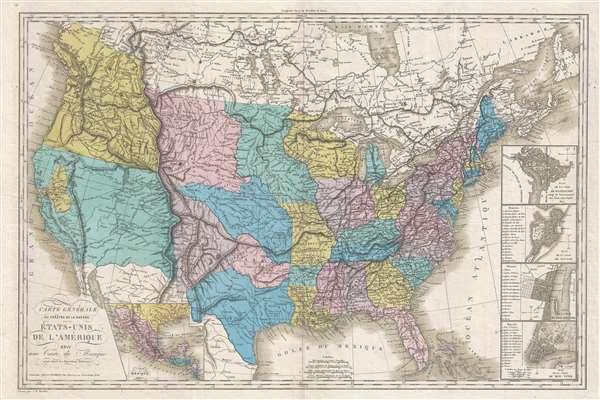 One of the earliest European maps to Illustrate the Califorina Gold Region.

A fascinating Mexican-American War era map of the United States by Jean Baptiste Tardieu. The map covers the United States from Atlantic to Pacific including Texas and the new territory acquired by the United States during the Mexican American War (1846 – 1848), the discoveries of Lewis and Clark, American claims in British Columbia, and the California Gold Discovery. Inset submaps detail Mexico, Washington D.C., Boston, Philadelphia, and New York. The map is a bizarre amalgam of up-to-date details, cartographic speculation, outright myths, and political positioning.

The map collector and cartographic historian wrote at some length describing this map, which was part of his collection,

In California, the Gold Region is shown by dotted lines and color. The only town in the Gold Region is Sutterville on the American River. Russian Establishment and Fort Ross are shown. The Great Basin is based on Humboldt; the route of the Escalante Expedition is clearly shown. There is an east-west mountain range running in an irregular line from the Rockies in northern New Mexico east through Missouri to the Mississippi. The northern part of the west is largely based on Lewis and Clark. Oregon Territory is labeled District de la Columbie and extends north to an irregular line at the highest about 54 degrees.

He also correctly notes that the map is derived from earlier 1826 map by Eustache Hérisson and notes that it does not appear in Carl Wheat's Maps of the Gold Region.

The political fiasco exhibited here in the Transmississippi is evidential of the confusing state of affairs at the end of the Mexican American War. The United States had acquired vast and largely unexplored territory that nearly doubled its size. Added to this were conflicting political claims regarding the boundaries of Texas, New Mexico, and Oregon. Much of this is evident on this map as the cartographer attempts to weigh and assess the situation. Texas in particular exhibits an odd configuration in deference to the old Spanish boundaries of New Mexico. North of Texas, the lands are divided between Arkansas and distinct Kansas Indian lands bounded by the Arkansas, Platte, and Missouri Rivers. In New Mexico and California, the old Spanish missionary trade routes are noted extending from Santa Fe to the Great Salt Lake (Timpanagos) area. Along the Missouri River and in the Pacific Northwest the routes of Lewis and Clark, in both directions, are noted with various canoe Camps identified.

This is one of the earliest European maps to illustrate the California Gold region in the Sacramento Valley. The discovery of Gold at John Sutter's mill by James Wilson Marshall in January of 1848 was one of the most definitive moments in American history. Coming at the end of the Mexican-American War, the timing of the discover could not have been more propitious. The combination of new seemly unlimited territory and the lure of gold led to a stampede of adventurers, prospectors, merchants, and homesteaders ready to embrace a prosperous life on the frontier. Moreover, the Gold Rush was not limited to Americans crossing the Great Plains. European, Australian, and even Chinese immigrants rushed into California hungry for their part of the great strike. This Great Migration of peoples transformed the United States in the span of just a few years from a former colony into an expansive transcontinental nation on the cusp of becoming a world power.

Here the gold region is highlighted in yellow and extends from San Francisco Bay to the Sierra Nevada hugging the Sacramento river and its various tributaries. The only community identified in this region is Sutterville, with a direct route noted to the Mission of San Jose.

The map illustrates American claims to British Columbia despite the fact that by the time it was printed, the issue had been resolved. Following the transcontinental crossing of North America by the British Northwest Company sponsored explorer Alexander MacKenzie (1792 – 1793), and the American expedition of Lewis and Clark up the Missouri to the mouth of the Columbia River (1804 – 1806), it became apparent that control of the fur and resource rich Pacific Northwest would bring great wealth and power to whoever could definitively control it. The American tycoon John Jacob Astor, with the permission of President Thomas Jefferson, was the first to attempt a permeant trading colony in the region, founding Astoria on the Columbia river in 1811. This quickly let to a confrontation with the established British-Canadian Northwest Company over this valuable territory. Americans in the 1820s through the 1840s argued that most of the Pacific Northwest should be part of the United States as a legacy of the 1803 Louisiana Purchase. England, on the other hand, argued for residual claims to the region derived from the MacKenzie expedition and its fur trading empires. The Oregon Dispute, as it came to be known, became an important in geopolitical issue between the British Empire and the United States, especially after the War of 1812. Americans adopted the slogan '54-40 or Fight!' until the Oregon Question was finally resolved roughly along the current border-line by the 1846 Oregon Treaty.

This map is descended from Eustache Hérisson's 1826 Carte Générale Des États-Unis De L'Amérique and, despite numerous updates, is probably from the same Jean Baptiste Tardieu plate. Hérisson published a subsequent edition in 1834 before selling the plates to L. Bès and E. Dubreuil who issued the present Mexican-American War edition. A final 1869 edition is noted by Tooley under the A. Bès imprint. It is likely that all examples are separate issues although they are usually found bound into large format European composite atlases. Of the series, the present edition, with its important Mexican-American War and Gold Rush content, is the most important.

This map is rare. It is not identified in either Wheat's Transmississippi or his California Gold Region. Moreover, we have identified no examples in the OCLC.