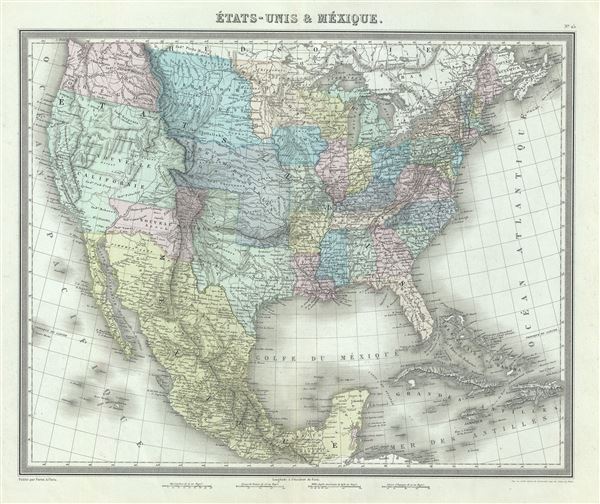 Unusual configuration of the Western United States. Texas at its largest.
$300.00

This is a scarce 1874 map of the United States and Mexico by Ambroise Tardieu. It covers the entirety of the United States and Mexico including parts of the West Indies. Although the map was published in 1874, cartographically it dates to 1849, right after the Mexican American War. Notes various territories in the west, including the Oregon Territory, the Northwest Territory, Indian Territory and New California. In modern terms this includes an exceptionally important representation of all parts of the United States west of the Mississippi including Washington, Oregon, California, Nevada, Arizona, Utah, New Mexico, Idaho, Montana, Wyoming, Colorado, Kansas, Nebraska, North Dakota, South Dakota, Missouri, Arkansas, Louisiana and Oklahoma. Texas is at its largest.

Throughout, the map identifies various cities, towns, rivers, islands, mountain passes and an assortment of additional topographical details. This map was prepared by Ambroise Tardieu as plate no. 25 and issued in his 1874 edition of Atlas Universel de Geographie Ancienne et Moderne.