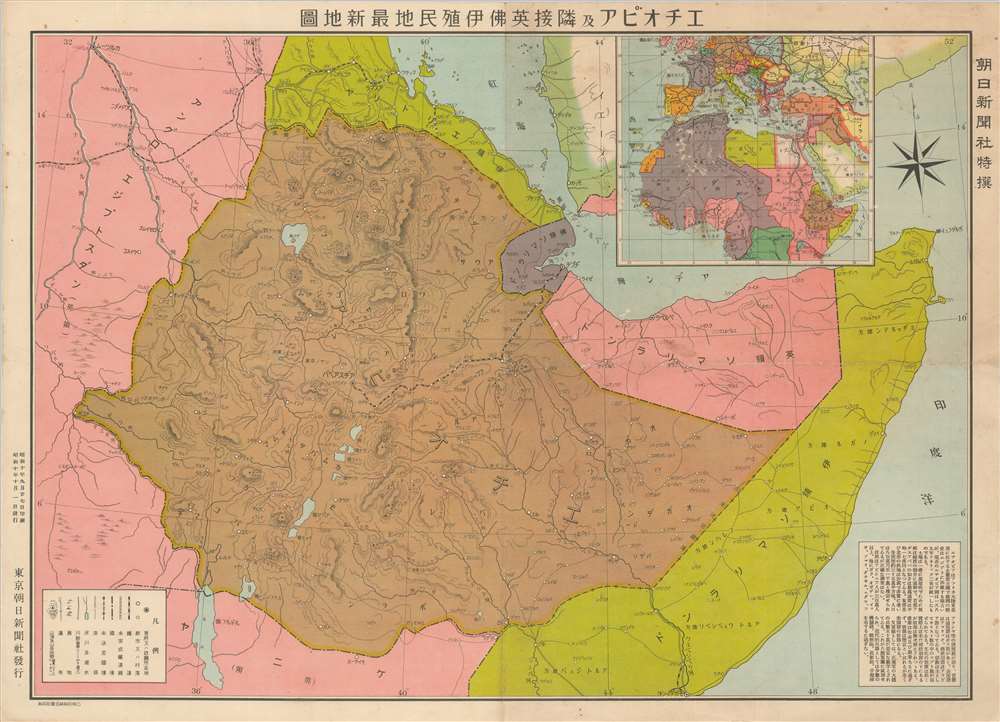 An intriguing September 1935 Japanese map of Ethiopia at the outbreak of the Second Italo-Ethiopian War (1835 - 1837). Illustrating a little-known episode in pre-WWII history wherein Japan was attempting to create an 'Alliance of Non-White Peoples.' The map covers all of modern-day Ethiopia, as well as parts of Eretria, Somalia, Djibouti, Sudan, and Kenya. An inset in the upper right situates Ethiopia in the context of North Africa, and a text block in the lower right descripts the people and geography.

As Imperial Japan grew in power in the heady days before the full-scale outbreak of World War II, Imperial Japan began pushing for an alliance with Ethiopia, part of what was dubbed the 'Alliance of non-White Peoples'. While the alliance never formalized, it is easy to see why Japan and Ethiopia might find common ground. Both were ancient hereditary empires, never conquered or dependent upon another nation. Both considered themselves oppressed by foreign powers - Japan had deteriorating relations with England and the United States, and Ethiopia was constantly threatened by Italian colonial interests. As the Japanese defeated Russia in the Russo-Japanese War (1899 - 1905), Ethiopia was at this very moment actively fighting against a second Italian attempt at conquest in the Second Italo-Ethiopian War (1935 - 1837). Moreover, as doors in Europe and America closed to Japanese trade, Japan was eager for new economic outlets. It also posited a network of alliances that could, collectively, stand up to European bullying. Japanese offices toured Ethiopia and talks began, but ultimate, Ethiopia had enough internal problems that the alliance proved untenable.

This map was printed on September 7, 1935 and released on October 1st. It was published as a special supplement to the Tokyo Asahi Shimbun (朝日新聞). Scarce. We are aware of no other examples.

Very good. Some wear on old fold lines. Light surface abrasion.
Looking for a high-resolution scan of this?