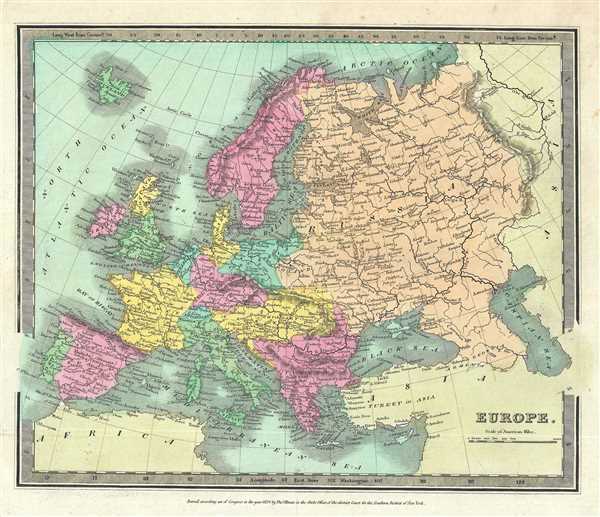 This is a fine 1834 first edition map of Europe by David Burr. It covers the entire European continent and covers from the Atlantic to the Ural Mountains and from the Arctic Circle south to the Mediterranean Sea. Important cities, rivers, islands, mountains and a host of other topographical features are noted. Political and regional territories are color-coded.

During this time, The British Empire rose to its peak while the Ottoman Empire was declining. Issued following the defeat of Napoleonic France and the Congress of Vienna, Europe was under a new peaceful balance of power, centered on the five most important powers (also referred to as the five 'Great Powers'): the United Kingdom, France, Russia, Prussia and the Austrian Empire. Alas, the 'peace' was but an illusion as the treaties ending the Napoleonic Era were inherently flawed. Old rivalries festered and nationalism, liberalism, revolution (industrial and otherwise) was once again on the rise throughout Europe.

According to Ristow, although Burr is credited on the title page, he left this atlas incomplete. He was appointed as topographer to the U.S. Post Office, and of the sixty-three maps finally included in this atlas, only completed eight. The rest of the maps were then completed by Illman and Pilbrow in Burr's style. The map was ‘Entered according to act of Congress in the year 1834 by Thos. Illman in the Clerk’s office of the District Court for the Southern District of New York’, but not published until the atlas was released in 1835. Published by D. S. Stone in Burr’s New Universal Atlas.