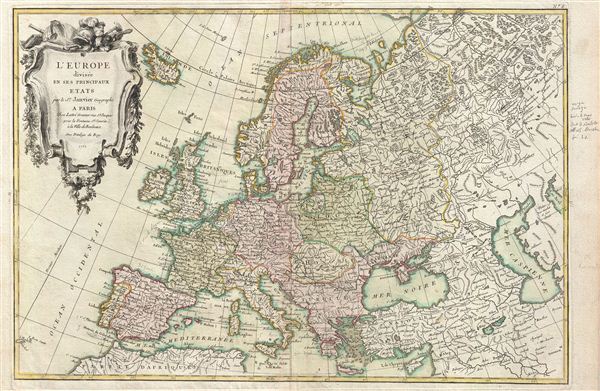 A beautiful first edition example of Jean Janvier's decorative map of the Europe. Janvier's map covers from Iceland to the Caspian Sea and from North Africa to the Arctic. The map is divided into countries and kingdoms with color coding according to region. As a whole it offers excellent detail throughout showing mountains, rivers, forests, national boundaries, regional boundaries, forts, and cities. The scope of the map is worth noting, as it intentionally encompasses not just Euopre but the extent of European cultural expansion into the surrounding areas. It no error that he map extends westward to Portuguese Madiera and Porto Santo, nor northwards to embrace Iceland, nor that it extends eastward into the Russian dominated lands beyond the Caspian. This was the 'Greater Europe,' a vast region considered naturally part of Europe's cultural patrimony. A large decorative title cartouche appears in the upper left quadrant. Drawn by Jean Janvier for issue as plate no. 2 in Jean Lattre's 1762 first edition of the Atlas Moderne.

Very good condition. Original centerfold. Blank on verso. Platemarks visible. Some period pencil marks, possibly related to a continental tour, could easily erased, but we have left that up to the buyer - we find them charming.