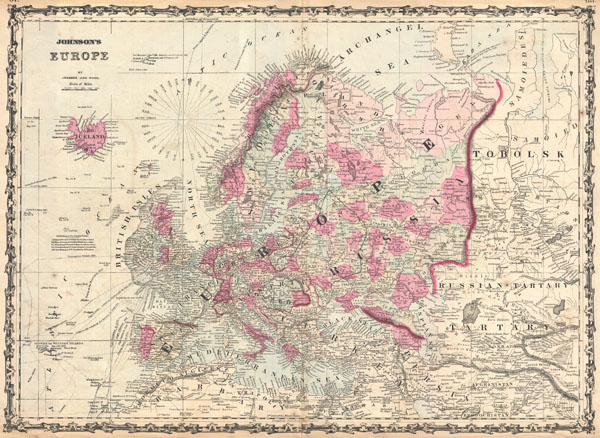 A very beautiful example of Johnson's 1862 map of Europe. This two part map details all of Europe as well as adjacent parts of Asia and Africa. Highly detailed with countless place names. Also shows the starting points and routes of numerous famous explorers including Byron, Cook, the Resolution, Vancouver, Isabella & Alexander, Carteret, Wallis and others. Color coded according to country and region. This Europe map appeared only in the 1860 - 1862 editions of Johnson's Atlas and was replaced with a new plate in 1863. Features the strapwork style border common to Johnson's atlas work from 1860 to 1863. Published by A. J. Johnson and Ward as plate numbers 67-68 in the 1862 edition of Johnson's New Illustrated Family Atlas. This is the first edition of the Family Atlas to bear the Johnson and Ward imprint.