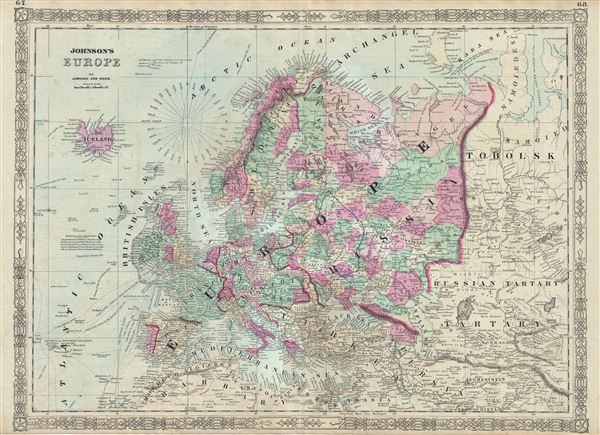 This is a beautiful example of Johnson and Ward's 1863 map of Europe. It covers the continent in its entirety from the Atlantic to the Caspian Sea and from the Arctic Ocean to the Mediterranean Sea. It also details Iceland and parts of Africa and Turkey in Asia. This map was created during an exciting historical period that witnessed the unification of Italy and saw the British Empire rise to its peak. This map shows cities, topographical features, railways, ferries and roads with color coding at the regional level. The routes of various explorers, including Cook, Byron, Carteret, and others, are shown. In contrast to most Johnson maps, the sea is here rendered in a pale blue.

This is the last edition of this map, which harkens back to Johnson's 1860 Europe, to be released before Johnson re-engraved his continental map places in the later part of 1864. The map features the fretwork style border common to Johnson's atlas work from 1863 to 1869. Printed by Johnson and Ward as plate nos. 67-68 in the scarce 1863 edition of Johnson's Family Atlas.