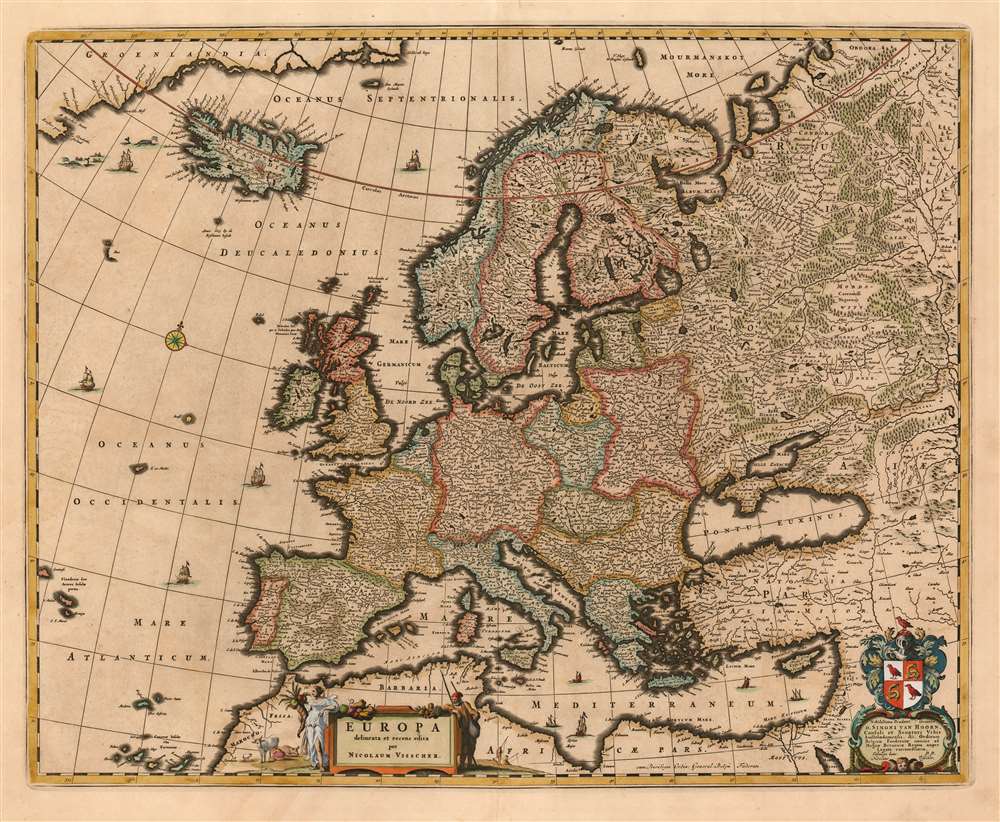 This is Nicolas Visscher's c. 1677 map of Europe, one of the defining Dutch maps of the continent for the second half of the 17th century. The maps of the Visscher family are prized for the superb quality of engraving and the high level of artistry in their compositions; this map is no exception - from the delicate plumes on the volcanoes of Stromboli, Aetna and Hekla, to the multiplicity of sailing ships decorating the seas, to the lovely dedicatory and title cartouches (see below.)

The Visscher family generally employed larger plates and finer detail than the mapmakers of the first half of the 17th century, generally improving the clarity of the maps and allowing the addition of more geographical detail. This map's boldest improvements compared with earlier maps of the continent lie in its extremities. To the east, Russia as far as the Volga and the lands to the north of it are based on the geography of Isaac Abrahamszoon Massa (1586-1643), a Dutch merchant and envoy to Muscovy. Although his geography made its way onto maps of Russia as early as the 1630s, it was not incorporated into general Europe maps until the Visschers'. And in the North Atlantic southwest of Iceland, the fictitious island of Frisland is notably absent: the fraudulent yet tenacious island was long retained on the maps of the seventeenth century until the younger Blaeu excised it from his 1648 world map, the rest of the cartographic establishment grudgingly taking his lead.

The elegant title cartouche, brimming with fruit, is flanked by two figures casually leaning upon it: Europa to one side, bearing a cornucopia and surveying a placid field of cattle. To the other side, a fisherman rests - seemingly incongruously, until one remembers the mapmaker's name. The grizzled angler is the family's trademark.(Visscher = Fisherman.) The map bears a beautifully engraved dedicatory cartouche featuring the arms of Simon van Hoorn (October 23 1618 - August 19, 1667.) Van Hoorn was a senator of Amsterdam between 1659 and 1667, governor of the Dutch East India Company, curator of the Athenaeum Illustre and envoy to Charles II of England in 1660.

This map was engraved for inclusion with Visscher's Atlas Contractus. It is sometimes dated as early as 1658, but it cannot have been produced earlier than 1660, the year the dedicatee van Hoorn took part in his embassy to London. It is far more likely that it was engraved in the vicinity of 1670, with the dedication being added to honor van Hoorn posthumously. The presence of the 'Cum Priviligeo' indicates a date no earlier than 1677, and that the map was probably included by one of the younger Visschers in their Atlas Minor, the composite atlas published by the family starting in the mid-1670 and continuing without change into the 18th century. Fifteen examples of the Atlas Minor appear in OCLC with varying pagination; OCLC also catalogues some two dozen examples of the separate map. We are aware of seventeen instances of the map appearing on the market going back to 1982.

Visscher, Nicolas I and II Atlas Minor Amsterdam c. 1677-1700     The Visscher family, from Nicolas I onwards, produced atlases under the title of Atlas Minor starting in the early to mid 1670s. These should be considered composite atlases, and they exhibited varying content and generally lackd title page or index. Nicolas I earned the privilege to publish from the States of Holland and West Friesland in 1677, so the presence of the ‘cum priviligeo’ on a map indicates it having been printed after this date. Examples of the Atlas Minor were produced into the early 18th century. Maps without the privilege may have been included in the elder Visscher’s Atlas Contractus, with some appearing in early examples of the Atlas Minor. Many appear to have been separate issues, or to have been added to the atlases of other map makers, primarily Jansson and his heirs.

Very good condition. Marginal mends at top and at centerfold, both not affecting printed area.