1852 Vuillemin Map of Russia in Europe 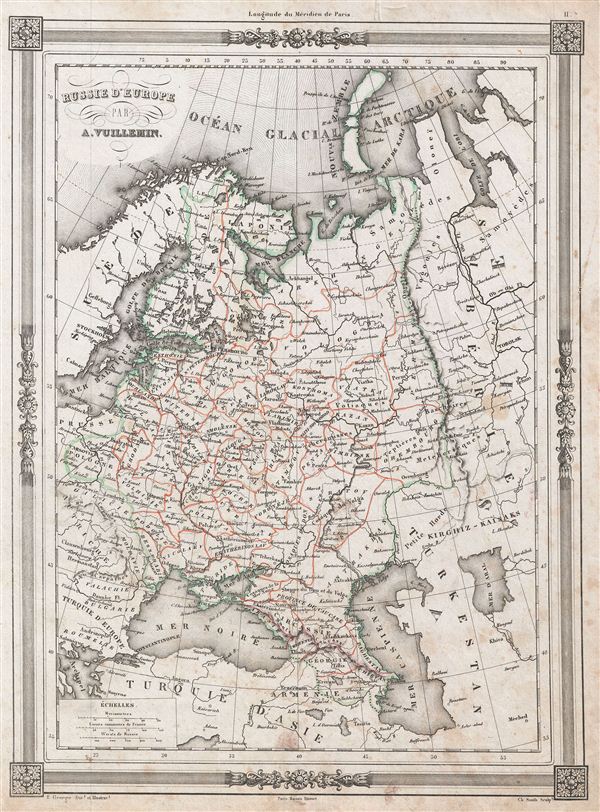 1852 Vuillemin Map of Russia in Europe

An uncommon and extremely attractive 1852 map of Russia in europe by A. Vuillemin. Covers the european portions of Russia from the Arctic Sea south to the Black Sea and Caspian Sea. Includes Poland, Lithuania, Latvia, estonia, Georgia and Armenia part of the Russian empire. Throughout, the map identifies various cities, towns, rivers and assortment of additional topographical details. During this time, Russia was ruled by Tsar Nicholas I, who adopted the doctrine of 'Orthodoxy, Autocracy, and Nationality' and was known to be one of the most reactionary monarchs in Russia. In 1825, Russian army officers, called the Decembrists, protested against Nicholas I's ascension to the throne. The Decembrists, so named because their revolt started in December, favored Nicholas I'st brother, Constantine, who seemed amenable to a British style constitutional monarchy. When Constantine abdicated the throne in 1825, the Decembrists refused to accept the more autocratic rule of Nicholas I. Had Constantine not abdicated and the Decembrists been successful, the bloody Bolshevik Revolution may never have occurred. The map features a beautiful frame style border. Prepared by A. Vuillemin for publication as plate no. 11 in the 1852 Maison Basset edition of Atlas Illustre Destine a l'enseignement de la Geographie elementaire.