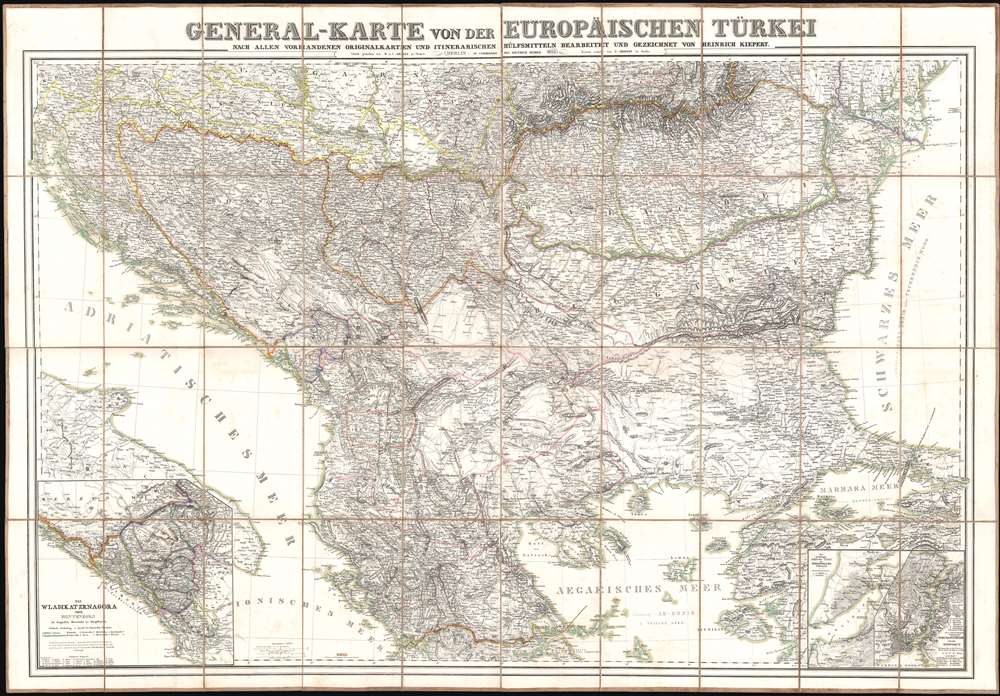 Created by one of the world's foremost experts on the Ottoman Empire at the time - Heinrich Kiepert.

This is an 1853 Heinrich Kiepert map of the Balkans at the height or the Crimean War. The map depicts the region from southern Italy and the Adriatic Sea to the Black Sea and Istanbul and from Hungary, Moldova, and Bessarabia to the island of Skiros in the Aegean Sea. An inset map in the lower left corner illustrates the autonomous region of Montenegro in detail, while two inset maps in the lower right corner highlight the Dardanelles, also known as the Hellespont, and the Bosporus.

At the time of this map's creation, the Ottoman Empire had been suffering from a slow decline. Several parts of the former Empire had either gained independence, such as the Kingdom of Greece in 1832, gained more autonomy and land, as was the case with Montenegro, or had been forfeited in wars, such as Wallachia and Moldova, which were lost to Russia after the Russo-Turkish War of 1829. Thus, with a withering world power on one side, and a resurgent Russia on the other, the stage is set for another conflict between them in the Balkans: the Crimean War.

The Crimean War lasted from October 1853 until February 1856. The root cause of the war has never been fully understood, but the stated impetus for hostilities was the rights of Christians in the Holy Land, with the Catholics being supported by the French and the Greek Orthodox Church gaining the support of the Russians. Other factors also included the gradual decline of the Ottoman Empire and British and French concerns about Russian gains in the region at the cost of the Ottomans. Both Britain and France fought on the Ottoman side in the Crimean War.

Public opinion at home, where discontent at the seemingly wasted effort and expense of sending armies to the Balkans, exerted an influence on the alliance. This outcry led to the planning and execution of an invasion of the Crimean Peninsula in September and a siege of the Russian naval port of Sevastopol, their primary naval base in the Black Sea, which lasted for eleven months. Russia finally sued for peace in March 1856 and in the Treaty of Paris the ended the war Russia lost its Black Sea ports, Wallachia and Moldavia gained a modicum of independence, and Christians in the Holy Land were given a degree of equality. The decline of the Ottoman Empire leveled out following the Crimean War and maintained the borders depicted here until the Russo-Turkish War of 1877-78 when Montenegro, Serbia, Bulgaria, and Romania fought on the Russian side against their Ottoman overlords.

This map was created by Heinrich Kiepert and published by Dietrich Reimer in 1853. The OCLC records examples as being part of the collections at nearly a dozen different institutions worldwide, but this map rarely appears on the private market, making it a great addition to any collection.