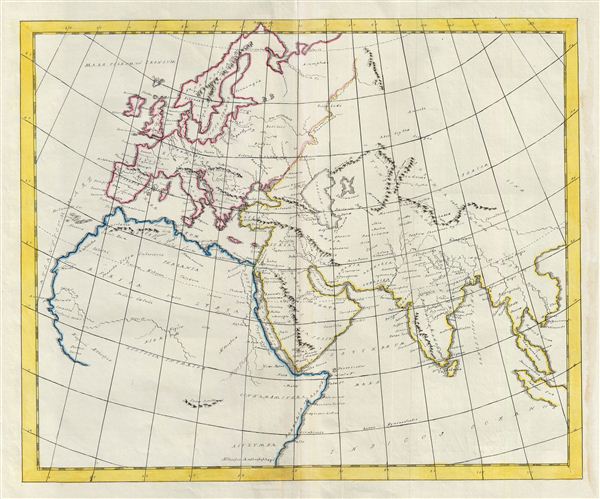 An unusual and beautiful 1823 manuscript map of The Ancient World, including Asia, europe and Africa. The map generally follows the historical atlas work of the english cartographer James Wyld however is a fully independent and unique hand rendered production. The manuscript geographical data and detail throughout is altogether outstanding and completed in a fine hand adept at decorative text and the rendering of rivers and mountains.

The map shows the world of classical antiquity from the Atlantic Ocean to Southeast Asia and from the Indian Ocean to the North Sea. It includes all of europe, Arabia, parts of Asia, including the Indian Subcontinent, and the northern parts of Africa. Color coding divides the ma by continent. Throughout there are interesting notations such as, in Africa, the 'Aethiopes Anthroophagi,' the city of Rapta identified by Ptolemy as the southernmost city, and the apocryphal Lune Montes in Africa