1843 Malte-Brun Map of Europe after the Barbarian Invasion 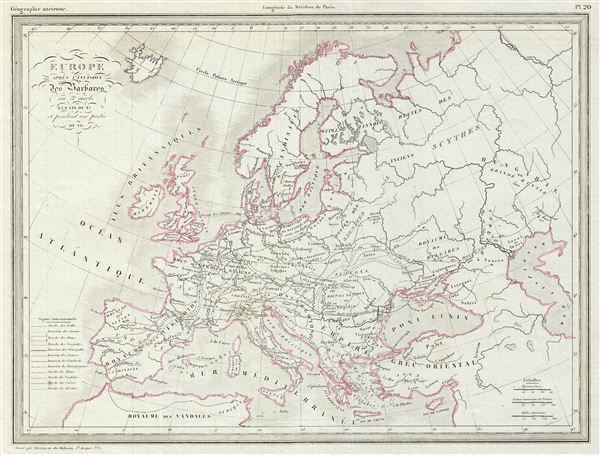 1843 Malte-Brun Map of Europe after the Barbarian Invasion

This is a fine example of Conrad Malte-Brun's 1843 map of europe following the third to fifth century Barbarian Invasions. The Barbarian Invasions saw the Western Roman empire fall to the Goths, Visigoths, and Vandals, and much of central and northern europe taken by Attila and his merry Huns. Modern historians also use the term 'Barbarian Invasions' to refer to the simultaneous and more peaceable migration of Germanic peoples westward, including the first Anglo-Saxon settlement of Britain, when, for all intents and purposes, the Roman empire had ceased to exist. The map notes the routes of 12 invader groups. Various rivers, islands and other topographical details are marked, with relief shown by hachure. This map was issued as plate no. 20 in Conrad Malte-Brun's 1843 Precis de la Geographie Universelle.