1830 Lapie Map of Europe under Charlemagne and Charles V 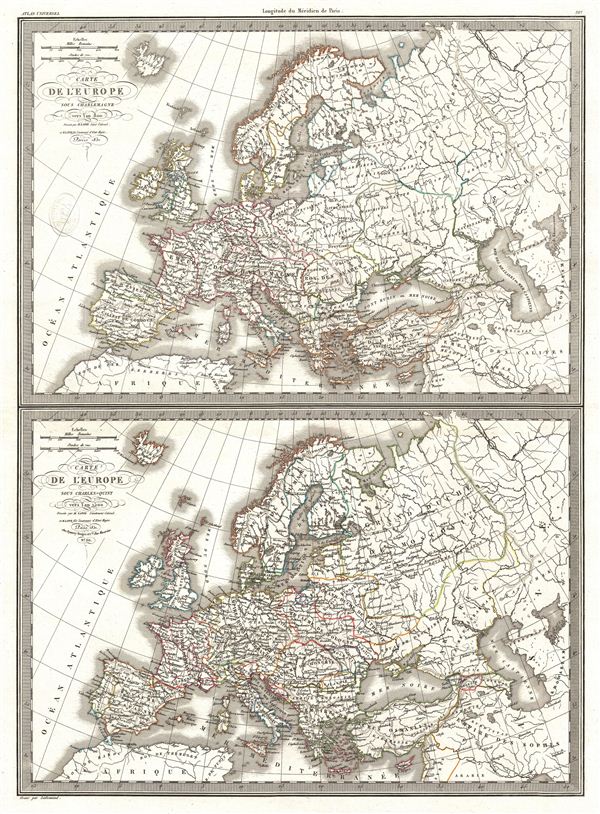 1830 Lapie Map of Europe under Charlemagne and Charles V

A fine first edition example of M. Lapie's map contrasting europe under Charlemagne in 800 versus europe under Charles V in 1500. The map is divided into two parts, with the upper showing europe under Charlemagne in 800 AD and the lower half detailing europe under Charles V in 1500 AD. After ruling and reforming France in 768, Charlemagne conquered Italy and, in 800, was crowned Holy Roman emperor. For the next 14 years until his death, Charlemagne's empire united much of Western and Central europe for the first time since the Romans, and the ‘Carolingian Renaissance' witnessed a Catholic themed revival of art, religion, and culture, encouraging the formation of a common european identity. Like Charlemagne, Charles V started off a mere king, in his case of Spain, and went on to rule the largest realm in europe since Charlemagne. Like Charlemagne, Charles V attacked Rome and, again like Charlemagne, was crowned Holy Roman emperor for his efforts. (Note: though a demonstrably winning strategy, Geographicus does not condone this tactic today). Charles V also oversaw vast colonial holdings in the New World and Asia, which probably helped fund his Inquisitors and the battle against Martin Luther's Protestant Reformation.

This map would make a fine companion map to Lapie's other historical maps of europe from the same atlas. engraved by Armand Joseph Lallemand as plate no. 18 in the first edition of M. Lapie's important Atlas Universel. This map, like all maps from the Atlas Universel features an embossed stamp from the Lapie firm.