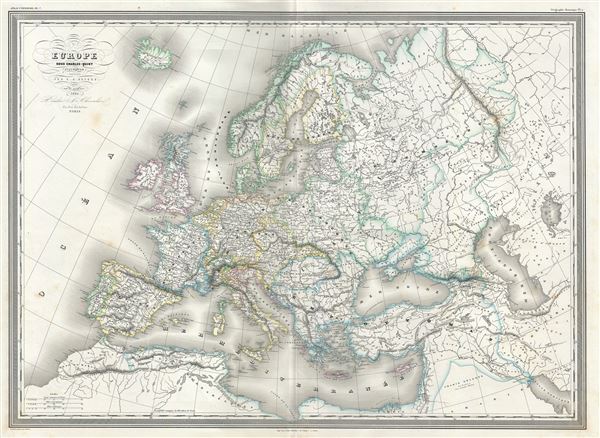 This is a beautiful 1860 elephant folio map of the Europe during the Charles V issued by A. H. Dufour. It covers all of Europe including Turkey, the Barbary Coast and European Russia and extends from Iceland south to Egypt and east as far as the Caspian Sea. Throughout, the map identifies various cities, towns, rivers and assortment of additional topographical details.

Charles V ruled Europe in the first half of the 16th century. Charles V started off a mere King of Spain, and and went on to rule the largest realm in Europe since Charlemagne. Like Charlemagne, Charles V attacked Rome and, again like Charlemagne, was crowned Holy Roman Emperor for his efforts. Charles V also oversaw vast colonial holdings in the New World and Asia, which probably helped fund his Inquisitors and the battle against Martin Luther's Protestant Reformation.