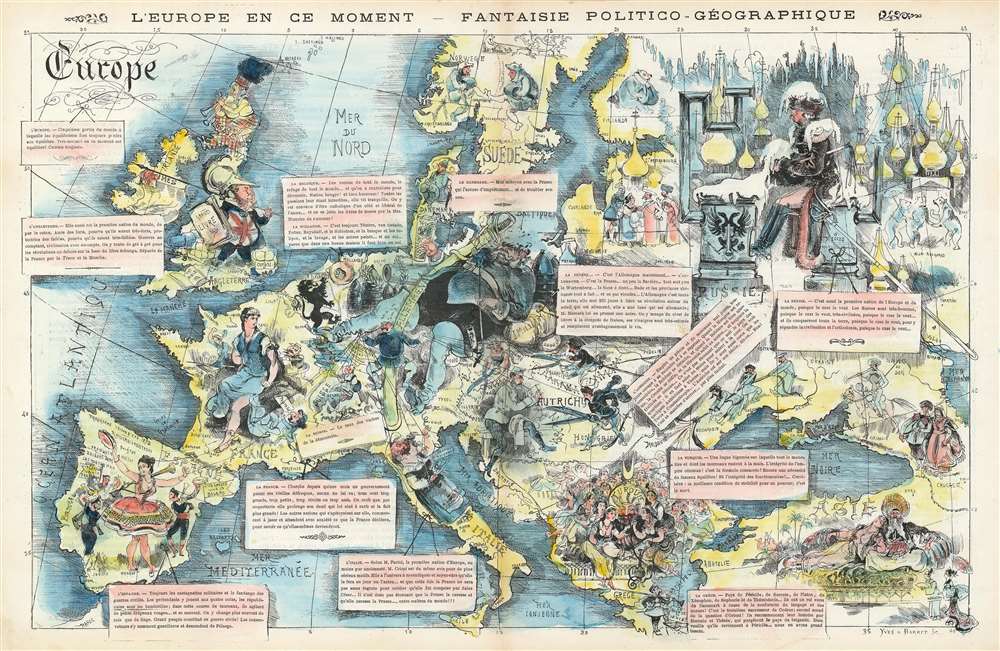 This is an 1872 Yves and Barret caricature map of Europe after the Franco-Prussian War. Coverage embraces all of Europe, from the Atlantic Ocean to the Caspian Sea and from Scandinavia and the Shetland Islands to the Mediterranean Sea. Illustrated personifications of each nation define the author's political viewpoints. Newly united Germany dominates central Europe in the form of the Kaiser, who is sprawled across what the French must have considered to be an ominously large territory. He reclines against a cannon and artillery shells, accompanied by a gigantic sword and an empty beer stein - suggesting at once military power, belligerence, and instability. A much smaller German soldier is illustrated holding the puppet strings of several other European countries, including Italy, Spain, and Austria. France, which had just lost the Franco-Prussian War, is represented as Marianne, the French national symbol, being tended by smaller officials and military men. The men are trying to get her to hold back her anger at having German guns pointed at her from Strasbourg (Alsace and Lorraine were annexed by Germany after the Franco-Prussian War) and to form a new government following the defeat, as well as the chaos of the Paris Commune. England is illustrated as a man in armor decorated with the Union Jack holding a book for a shield. He is surrounded by the Bible and bales of cotton. Spain, Italy, and Austria are depicted as contentedly going about their business, per the German soldier's wishes, but the Austrians are illustrated holding scissors, possibly to try to cut ties with the now overly powerful Germany. Russia is a frozen wasteland with their onion-domed churches and a land where everything happens 'because the czar wants it to be'. The Turks represented as a caricature of eastern decadence: a single man surrounded by elegantly dressed women attending to his every whim.

This map was engraved by Yves and Barret and published in the July 6, 1872 La Vie Parisienne. We are aware of two examples in institutional collections, the David Rumsey Map Collection at Stanford University and Persuasive Maps: the PJ Mode Collection at Cornell University. This map is incredibly rare on the private market.