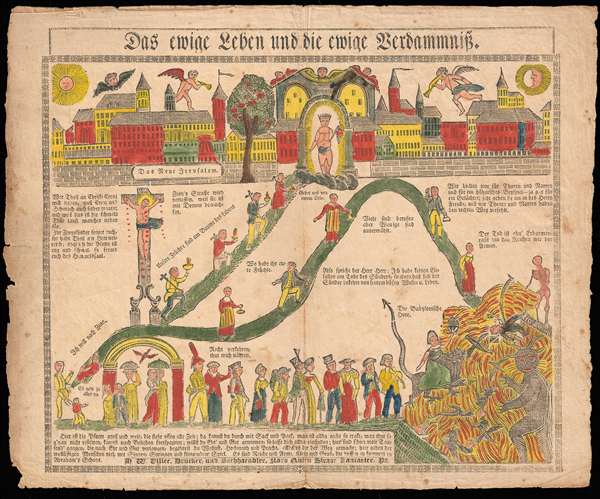 A rare c. 1820 Amish or Pennsylvania Dutch allegorical fraktur or broadside illustrating the paths to heaven and hell. This broadside was issued in Lancaster, PA, by Herman W. Villee. The view appears to be a woodblock engraving. At the top, a grand city is identified as 'Das Neue Jerusalem' or 'The New Jerusalem.' At the bottom right, Satan appears amidst the fires of Hell and several daemons. The broadside reveals three paths, two paths, diverging at an image of Jesus Christ bleeding on the Cross, which itself forms a gate. Passing through the gate, the righteous can ascend directly to heave, where Jesus appears crowned. The sinful follow one of two other potential paths, one through a wide gate, and another on more winding circuitous route, but both leading to Satan and Hell. Along the bottom, the rich and well-dressed gleefully march into the fires of perdition, some playing musical instruments, in rough translation, their fates is descried thus:

Here is the entrance great and wide, open to all from each side: - Pass on ye with sack and pack, be unconcerned, be not exact: walk gently ahead, not a word will be said; If you see honour and gain, hastily appear and record thy name; thousands with similar design, have traveled this road in proper line; ye that lust after splendor, luxury and pride pass on, the path is fully side; the frolicksome in great numbers with music full of sound, ar marching to the place to which they are bound; the rich, poor, the tall and small, in Abraham's lap hope to be taken up, yea, withal

German American broadsides are highly ephemeral and extremely rare. A wonderful addition to any serious collection of Americana.

Herman W. Villee (1789-1842), also known as Herman William DeVille, was a French born German speaking printer active in Lancaster, PA, during the early part of the 19th Century. Villee has a lucrative business printing in German for the local Amish or Pennsylvania Dutch community. He issued several simple but elegantly engraved religious broadsides, as well as marriage and birth certificates, and reprinted government documents in German. Learn More...

Good. Edge wear. Some soiling and even overal toning. A couple of minor verso reinforcements.