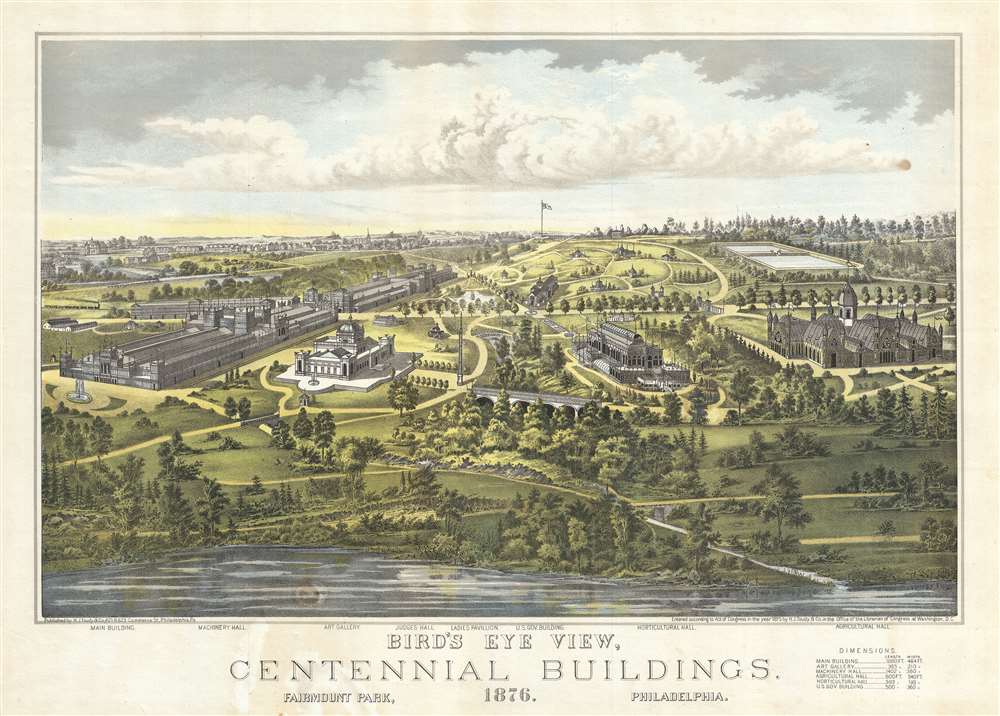 This is an impressive 1875 view of Fairmount Park, Philadelphia, as seen from far above the Schuylkill River. This view was prepared by H. J. Toudy for the 1876 Centennial International Exhibition and was issued one year before the actual event. The buildings and park grounds were based upon architectural plans and landscape renderings. Nonetheless, multiple buildings are recognizable as are the wide boulevards, fountains, and bridges. The main buildings are identified via a key under the engraving. This is one of several separately issued lithographic views of the Fairmount Park and the prepared by Philadelphia commercial engravers to capitalize on the fair's tourist economy.

Henry J. Toudy (fl. c. 1857 - c. 1877) was an American lithographer, engraver, and map publisher active in Philadelphia during the middle part of the 19th century. Little is known of Toudy's parentage or early life, but he established a steam lithography press in Philadelphia around 1856. Toudy was best known as a printer of city and town views, with many such productions bearing his imprint. He also published portraits, railroad bonds, stock certificates, and map. Toudy's original offices were located at 503 and 505 Chestnuts Streets. Insurance records suggest that Toudy's Chestnut Street offices were gutted by fire on March 25, 1879. Records suggest that the Toudy firm was reestablished in 1884 at 829 Walnut Street. In 1892 a Henry J. Toudy is recorded as the owner of the Greenback Coilliery, a mine in Shamokin, PA famous for a terrible explosion that had occurred years earlier under another owner. It is unclear if they are the same person or possibly related, but such is neither unlikely nor impossible. Learn More...