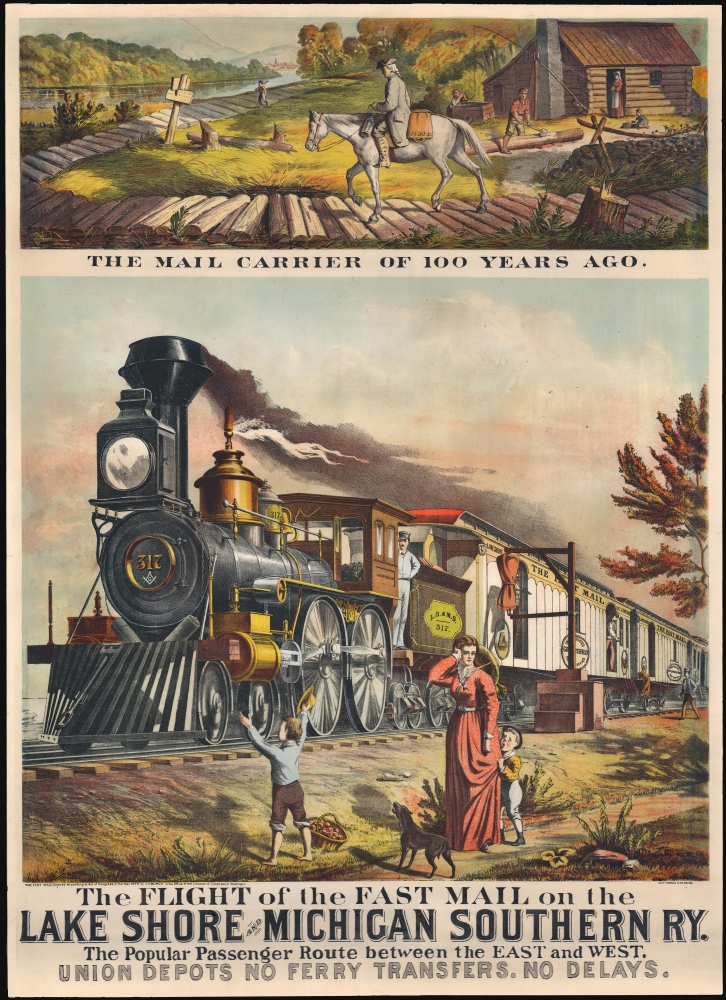 A spectacular 1875 5-color chromolithograph advertising broadside promoting the 'Fast Mail' route of the Lake Shore and Michigan Southern Railway - this was the first major use of railroads to institute a national 'Express Mail' service. The view contrasts the horse-based mail carrier of 1775 (or literally 1 year prior) to the steam-railroad 'Fast Mail' service. Fast Mail was an ephemeral U.S. postal initiative that utilized the New York Central and Lake Shore and Michigan Southern Railway lines to run an exclusive mail service line capable of moving tons of mail between New York and Chicago - halfway across the country - in just 24 hours. At the time, a ground-breaking achievement. Here the 'Fast-Mail', propelled by an impressively rendered steam locomotive, passes through town, hardly slowing as outbound mail is grabbed from a 'mail post' while inbound mail is tossed off the train to a waiting postal worker.

In the 1830s, the Postmaster General, frustrated by the slow pace of horse and stagecoach delivery, began contracting railroads to transport the U.S. Mail. The first such route ran from Lancaster to West Chester, Pennsylvania. In the late 1830s, additional routes sped up mail transit between Washington D.C., Baltimore, Philadelphia, and New York. Congress passed an act in 1838 making all U.S. railroads official 'Post Roads'. By 1864, all mail was officially moved to railroads. Despite faster movement of mail, the transition to rail service was difficult and faced countless logistical hiccups. Postal General Superintendent George S. Bangs began a series of reforms in the early 1870s to streamline the process. These included introducing mobile rail-car post offices and the 1875 introduction of 'Fast Mail' service, an exclusive mail service between New York and Chicago that could make the trip in just 24 hours. The first such trip, on September 15, 1875, was run jointly by the New York Central (New York to Buffalo) and the Lake Shore and Michigan Southern Railway (Buffalo to Chicago). It carried 33 tons of mail on five specially designed cars, ushering in the first true American 'Express Mail'. The 'Fast Mail' service operated only a short time, from 1875 to 1876, when the Federal Government, facing sustained economic fallout from the Panic of 1873, reduce postal funding. Nonetheless, Fast Mail was a much-acclaimed success, leading to the further development of railway postal lines through the United States.

The Lake Shore and Michigan Southern Railway (LSMS) was founded as the Erie and Kalamazoo Railroad in Michigan in 1833. The firm grew through a series of consolidations until 1869, when it was renamed the Lake Shore Railway, then, after another merger, the LSMS. Trackage ran along the southern shore of Lake Erie, across southern Michigan to Chicago. Around 1877, railroad tycoon Cornelius Vanderbilt (1794 - 1877) acquired the majority of LSMS stock. The railroad successful operated as LSMS until 1914, when it merged with the New York Central and Hudson River Railroad to form the New York Central Railroad. Today, the LSMS trackage is still used as a major rail corridor, hosting Amtrak trains.

This broadside was published in 1875 by John A. Burch in Buffalo, New York, to promote the Lake Shore and Michigan Southern Railway's participation in the 'Fast Mail' initiative. The view was printed in Buffalo by the firm of Clay and Cosack. This piece is rare, we note perhaps 3 examples in institutional collections, including the Huntington Library, the Albany Institute of Art, and the National Museum of American History.

Hugh De Musgrove Clay (August 27, 1834 - October 14, 1904), also known as Hugh M. Clay, was an English-American artist and chromolithographer based in Buffalo, New York. Clay arrived in the United States with his family when he was just 2. His earliest recorded work in Buffalo dates to 1854, when he was employed with the firm of Compton and Gibson. When Sage and Sons bought out Compton in 1856, they inherited Clay, who worked with them for several years. Starting in 1864, Clay partnered with Julius Herman Cosack (1826 - 1892), a fellow engraver for Sage, to found 'Clay and Cosack.' The partnership lasted until about 1877, when Clay left the firm. He subsequently partnered with Henry A. Richmond under the imprint of 'Clay and Richmond'. This firm lasted until 1886, when Clay retired and Richmond acquired the remaining stock, operating subsequently as 'Richmond Lithographing Company'. In 1896, Richmond Lithographing was bought out by Horace Reed and Hugo R. Munro, who renamed it the 'Niagara Lithograph Company', which operated well into the 20th century. Clay relocated to Manhattan, New York City in 1902, where he died in 1904. Learn More...


Julius Herman Cosack (February 15, 1826 - May 2, 1892) was a German-American engraver based in Buffalo, New York, in the second half of the 19th century. Cosack was born in Danzig, Germany, where he apprenticed as a lithographic engraver, before emigrating to the United States in 1853. He spent 3 yeas in New York before relocated to Buffalo, where he took work with the lithographic firm of Sage and Sons. There he met the English-American artist and lithographer Hugh De Musgrove Clay (1834 - 1904), with whom in 1864, he founded the lithography firm of 'Clay and Cosack.' The partnership lasted about 13 years before Clay split of, founding another firm with Henry A. Richmond. From 1878 Cosack operated independently as 'Cosack and Company' before taking on Edwin Alonso Clark (1848 - 1881) as a partner in 1880. The firm subsequently operated as 'Cosack and Clark'. Clark died suddenly in 1881, and the firm reverted again to 'Cosack and Company'. Cosack eventually took on Herman T. Koerner (1855 - 1927) and Charles Eugene Hayes (1858 - c. 1910) as partners, but did not change the imprint. The firm became prominent, acquiring a large five store building in downtown Buffalo and installing presses capable of printing 200,000 sheets a day. When Cosack died in 1892, the firm was taken over fully by Koerner and Hayes, who introduced their own imprint. Learn More...

Good. Laid down on archival card. Professional near indiscernible reinstatement work to both right and left printed edges. Stabilized crack to left of center.