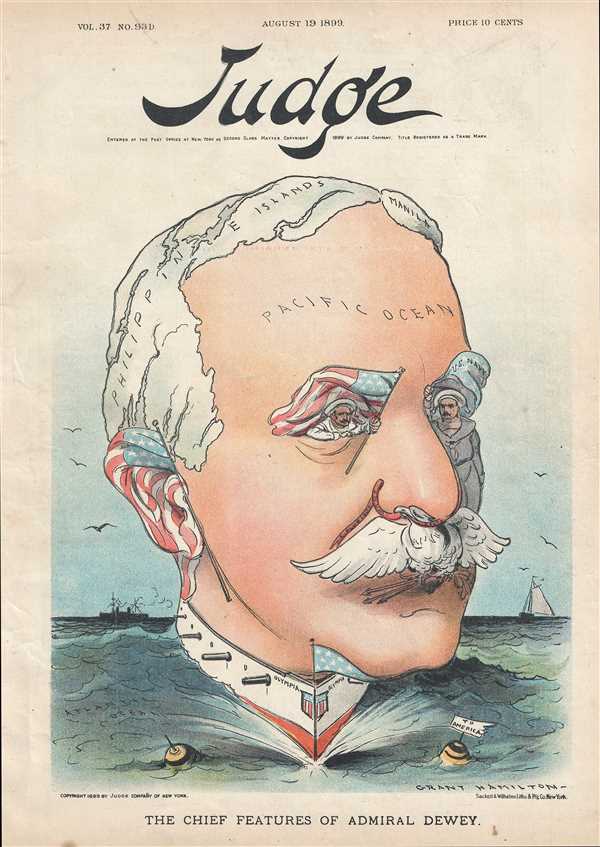 The Hero of the Battle of Manila Bay during the Spanish-American War.
$350.00

This is a Grant E. Hamilton political cartoon promoting the return of Admiral George Dewey that graced the cover of the August 19, 1899 issue of Judge Magazine. The cartoon blends Dewey's flagship, the Olympia seamlessly into his portrait, using the ship as the collar of his uniform. The portrait is full of imagery: Dewey's hair is labeled as the Philippine Islands and Manila, while his ear and eyebrows are fashioned from the American flag. His moustache is an eagle, based on the eagle illustrated on the Official Sea, of the United States. A sign floating on a buoy near the bottom of the image reads, 'To America'.

When this issue of Judge went to press, Dewey was on his way back to the United States following the successful defeat of the Spanish Navy in Manila Bay during the Spanish-American War. The nation had been gripped by a frenzied fascination with its new war hero, desiring as much information as the press could extract from a man who has gone down in history as incredibly shy and humble. Not given to self-congratulation, this cartoon references the fact that Dewey chose to forego a proposed cross-country tour by rail following his arrival on the West Coast and instead elected to return to the United States via the Indian Ocean, the Mediterranean Sea, and the Atlantic, and arrive in New York City. Admiral Dewey did not understand the nationwide fascination with him and the Battle of Manila Bay because, from his perspective, it had not been a difficult battle. Nonetheless, when Dewey arrived in New York after his six-month journey, he was greeted as a conquering hero by New York Governor Theodore Roosevelt, other dignitaries, and a throng of admirers. A parade in his honor marched down Fifth Avenue four days later and was witnessed by a crowd of over one hundred thousand. Later that year, Dewey mounted a short-lived campaign for president that never truly materialized into a serious attempt. A series of political blunders that offended several different constituencies effectively sidelined his candidacy. Shortly after his failed run, however, he was named president of the newly-established General Board of the Navy Department, a position he held until his death.

This cartoon was drawn by Grant E. Hamilton and published on the cover of the August 19, 1899 issue of Judge.

Hamilton, G. 'The Chief Features of Admiral Dewey.' Judge Vo. 37 No. 93D, August 19, 1899 (New York: Judge Publishing Company).     Judge (1881 - 1947) was a weekly satirical magazine published in the United States. The first issue was first printed on October 29, 1881 and was only sixteen pages long. Judge was launched by James Albert Wales, Frank Tousey, and George H. Jessop, who had previously worked for its rival magazine Puck. In the mid-1880s, William J. Arkell purchased the magazine, which was having difficulty competing with Puck. Arkell, taking advantage of his considerable wealth, persuaded cartoonists Eugene Zimmermann and Bernhard Gillam to leave Puck and join the staff at Judge. As Arkell was a supporter of the Republican Party, Judge soon became a platform for criticizing the Democratic administration of Grover Cleveland, which was blamed for the Panic of 1893, among other issues. With support from the Republican Party, Judge saw a rise in popularity during the 1880s and 90s, surpassing Puck in both content and circulation. Judge also widely supported the candidacy of William McKinley, largely through the work of cartoonists Victor Gillam and Grant E. Hamilton. Judge reached its peak circulation of around 100,000 by 1912. One of its former editors, Harold Ross, used his experience at the magazine to launch his own publication, The New Yorker in 1925, which quickly began to compete with Judge. Due to the success of The New Yorker and the Great Depression, Judge became a monthly is 1932 and ceased circulation in 1947.

Very good. Light wear along margins. Text and cartoons on verso.
Looking for a high-resolution scan of this?