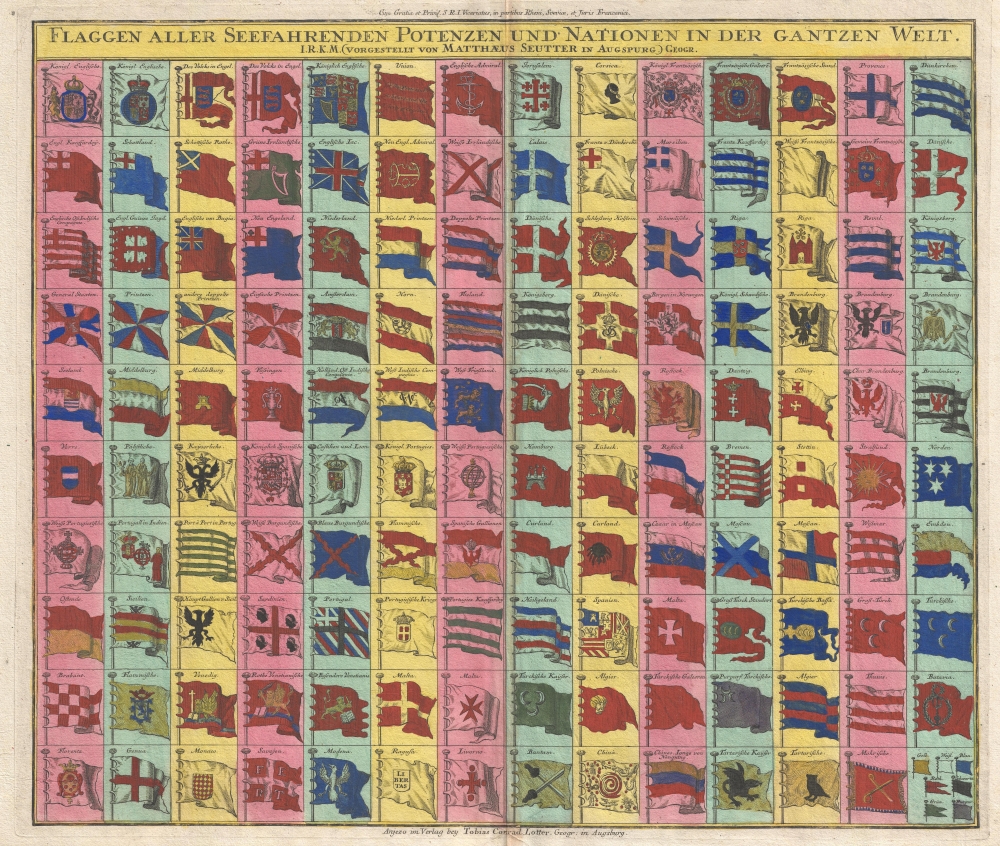 A very attractive c. 1765 flag chart issued by Matthias Seutter and TobiasConrad Lotter. The flag features 139 flags of various nations, factions, and trading companies. Among the more interesting flags are those of the Dutch West India Company (G.W.C. /Geoctroyeerde Westindische Compagnie) and the Dutch East India Company (V.O.C. / Vereenigde Oostindische Compagnie). The premier placement of English flags in the upper left quadrant suggest that this chart may have been copied from an English source.

At bottom center the flag of Empire of China (Sina) stands out. It appears as a great whirlpool surrounded by eight decorations. This is most likely based upon an image of the Chinese flag appearing in Carl Allard's, 1705 Dutch flag book, Niewe Hollandse Scheeps Bouw. In fact, it is a misinterpretation of the Qing flag, a dragon on a yellow field with eight banners. However, European mapmakers, likely having never seen a Chinese flag, interpreted the dragon to the best of their ability.

This map is probably derived from a Dutch flag chart issued by Danckerts c. 1700. The chart was picked up by J. B. Homann, who issued in own variant c. 1710. When Seutter left the Homann firm early in the 18th century, he may have taken this plate with him or simply copied it. Seutter issued his own variant sometime after 1737, as the chart notes his privilege, a kind of early copyright suggestive of royal patronage, at top center. After the 1762 death of Suetter's son, Albrecht Carl Seutter, the plate for this map was acquired by Tobias Conrad Lotter, Matthias Seutter's son in law, who added his own imprint at bottom center – as in the present example.


Tobias Conrad Lotter (1717 - 1777) was a German engraver and map publisher. Lotter was the son of a baker and city guardsman, but married Euphrosina (1709 - 1784) Seutter, elder daughter of the prominent map publisher Matthäus Seutter. He began working at his is father-in-law's map business about 1740. Between 1740 and 1744 he produced, under Seutter's imprint, the Atlas minor, Praecipua orbis terrarum imperia, regna et provincias, Germania potissimum tabelli. Upon Seutter's death, in 1757, the firm's stock was taken over by his son, Albrecht Karl Seutter (1722 - 1762), who himself died in 1762, just a few years later. The remaining Seutter map plates were subsequently divided between Lotter and the publisher Johan Mitchell Probst (1727 - 1776). With the support of his sons, Matthäus Albrecht (1741 - 1810), Georg Friedrich (1744 - 1801) and Gustav Conrad (1746-1776), Tobias Conrad Lotter succeeded in building on the economic success and professional reputation of his father-in-law. In time, Lotter became one of the most prominent mid-18th century map publishers working in the German school. After Lotter's death in 1777, the business was taken over by his two eldest sons, who, lacking their father's business acumen, presided over the firm's slow decline. It was nonetheless passed on to a subsequent generation of Lotters, Matthäus Albrecht Lotter's sons, Gabriel (1776 - 1857) and Georg Friedrich (1787 - 1864), who pushed it into further decline until it faded out in the early-19th century. Learn More...