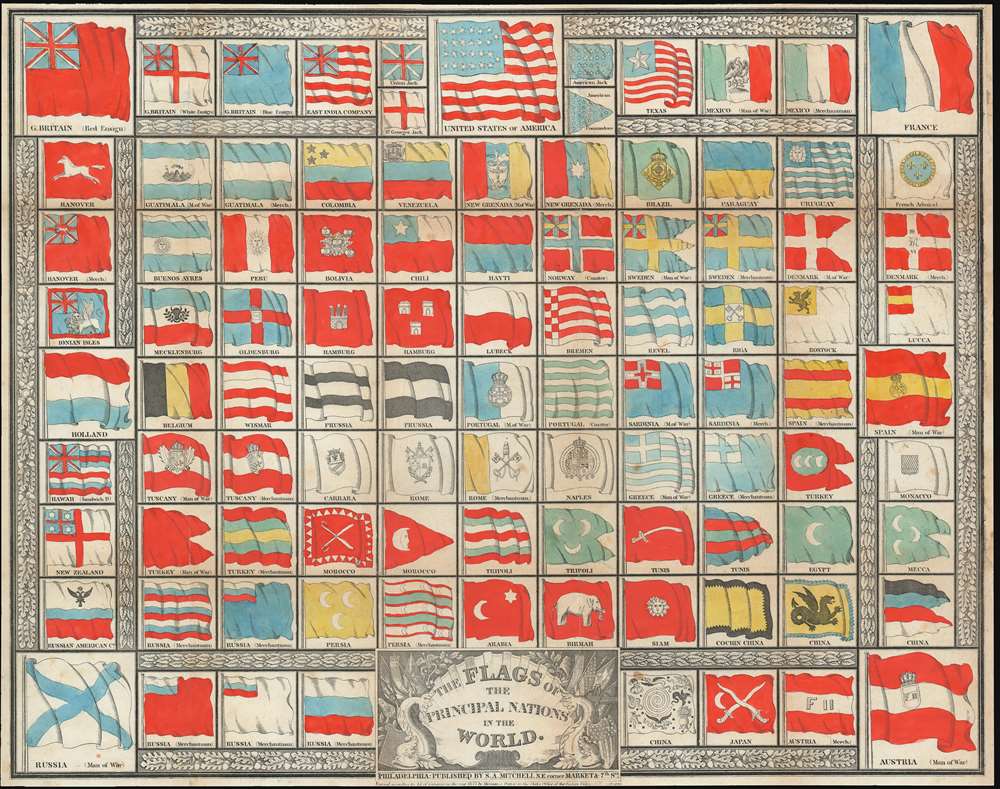 Uncommon flag chart showing the flag for the Republic of Texas.
$950.00

A beautiful 1837 flag chart issued by Hinman and Dutton, and Samuel Augustus Mitchell Sr. including the maritime ensign of the Republic of Texas. The chart features a total of 98 flags associated with countries in Asia, Africa, America, and Europe. In some cases, both merchant and naval ensigns are included. The chart also includes the ensigns of merchant companies, including the British East India Company and the Russian-American Company.

There are several flags of interest, including the Republic of Texas Naval Ensign (1837-1839), two unusual Guatemala (sp. Guatimala) flags, and the flags of two trading companies: the British East Indian Company (potentially the inspiration for the U.S. Flag) and the Russian American Company (a Russian joint stock company that administered Russian interests in Alaska).

This rare flag chart was published by Samuel Augustus Mitchell Sr. in 1837, making it one of his earliest publications. The flag chart was prepared to illustrate the Accompaniment to Mitchell's Map of the World, a volume composed by to supplement and describe Mitchell's great wall map. The copyright imprint indicates Philadelphia engravers, Hinman and Dutton, who also held the copyright on the book. There appear to be two states to this map, one issued by 'Barnes' and the present chart by Mitchell. Both are dated to 1837, both feature the Hinman and Dutton copyright, so presumably they were published contemporaneously. We have been able to identify only a single example the institutional collections of the Huntington Library.

Hinman and Dutton (fl. c. 1836 - 1838), possibly Samuel Dutton and William Hinton, were map engravers based in Philadelphia, Pennsylvania in the first half of the 19th century. The firm engraved for several publishers, including Samuel Augusts Mitchell's Sr. in 1837. The firm was based upon 7 Commerce Street in Philadelphia.