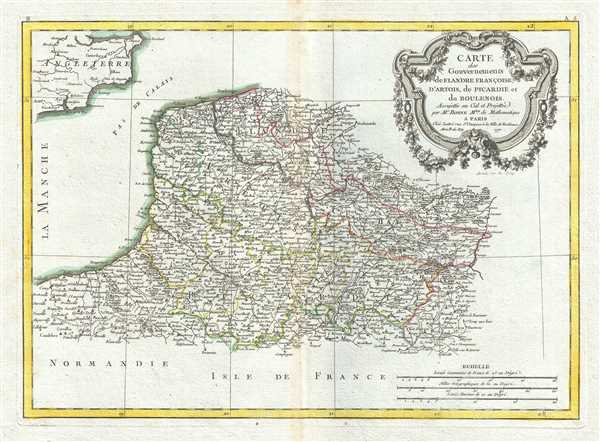 Decorative map of the French cheese producing region of Picardy and vicinity.
$175.00

An attractive example of Rigobert Bonne's 1771 decorative map of the French regions of Picardy, Artois, and French Flanders. Covers the region in full from the English Chanel to Normandy.

Artois was a former province located in the northwestern part of France, bordering Belgium on the north and Picardy to the south. This roughly corresponds to the modern department of Pas-de-Calais, and includes the prominent cities of Arras, Saint-Omer, Lens and Bethune.

A large decorative title cartouche appears in the upper right quadrant. Drawn by R. Bonne in 1771 for issue as plate no. A 5 in Jean Lattre's Atlas Moderne.