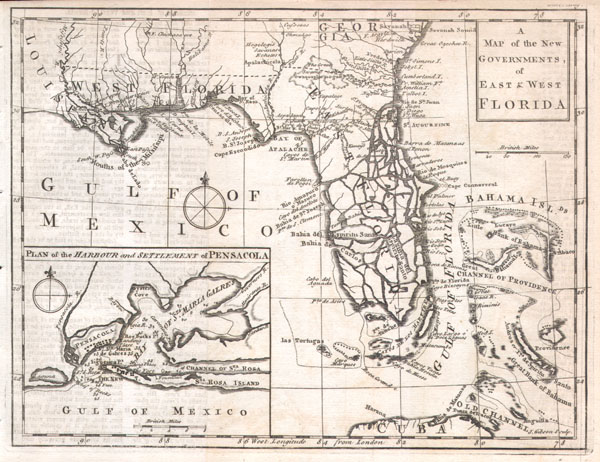 Featured here is a rare and important map of Florida issued for Gentleman's Magazine in 1763 to describe the new territories of British Florida. The map depicts the provinces of East and West Florida as they emerged following the Treaty of Paris that ended the French and Indian War. The treaty ceded to the British control of most of the North America territory east of the Mississippi River. The treaty included an agreement with Spain to exchange Cuba for Florida. The British quickly set up two new provinces divided by the Apalachicola River. West Florida comprised the territory between the Apalachicola River and the Mississippi River. East Florida included most of the peninsula of Florida. The division was intended by the British to reduce conflicts between colonists and the Native Americans of the region by outlawing English settlement (except for the coast) west of the Apalachicola River. The map itself attempts to depict the region in considerable detail and includes political boundaries, cities, forts, canals, rivers, swamps and American Indian Tribes. Extends from New Orleans and the Mississippi River east to the Bahamas, which are shown in full, north as far as Savannah and south as far as Cuba. A large inset in the lower left quadrant depicts Pensacola bay and harbor with detailed depth soundings and individual buildings noted. In an attempt to depict the Everglades, the largely unexplored peninsula of Florida is shown as a series of islands and interconnecting waterways . This map was issued in the November 1763 issue of Gentleman's Magazine. This issue of the magazine is included with this item and contains an extensive textual description of Florida, anecdotes, and commentary on the indigenous inhabitants.