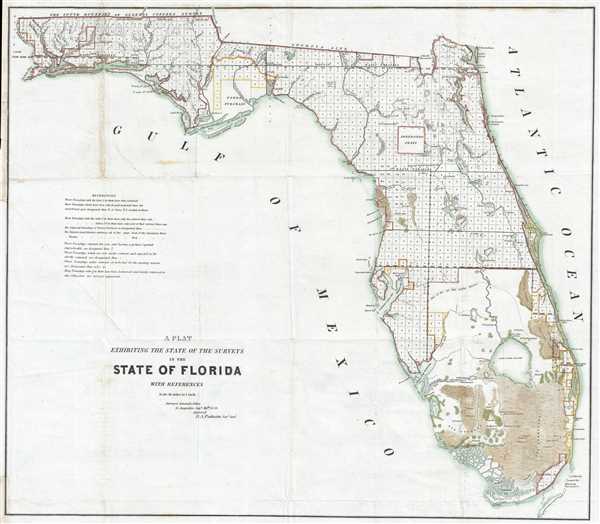 This is an 1851 B. A. Putnam land survey map of Florida. The map depicts the state from the Perdido River to the Atlantic Ocean and from the Florida-Georgia state line to the Everglades. Highly detailed, the township grid is labeled, along with numerous rivers, keys, and lakes. The map labels several important Seminole War forts, including Fort Bassinger, Fort Center, Fort Thompson, Fort Beynaud, and Fort Adams. The Everglades, Big Cypress, Fort Lauderdale, Lake Okeechobee, and other locations are also labeled. Townships labeled with the letter S have been sectioned, while townships labeled with the letter T have only had the exterior lines run. This information, and more, is included in a references section situated along the left border.

The most intriguing aspect of the map is the inclusion of the Arredondo Grant, bequeathed to Don Fernando de la Maza Arredondo by the Spanish crown. A holdover from Spanish rule in Florida, Arredondo's grant, and others like it, became a point of contention between the United States government and grant holders following Florida's annexation in 1821. Arredondo's case eventually arrived in the United States Supreme Court, which initially upheld his right to the land. Nonetheless, subsequent events ruled against Arredondo and the grant was dissolved. Eventually, after incredible difficulty and protest, the entire land grant system was dissolved.

Forbes Purchase, a large tract of land purchased from Spain by three American traders in the late 18th century situated in the Florida Panhandle near Apalachicola Bay, is also noted here. After Florida became part of the United States there was an attempt by the federal government to seize the land, but it was denied by the United States Supreme Court. Unfortunately, as Forbes Purchase was mostly uninhabitable swampland, it was impossible to develop and later sold off in lots.

Very good. Even overall toning. Left margin extended. Backed on archival tissue for stability. Blank on verso.
Looking for a high-resolution scan of this?