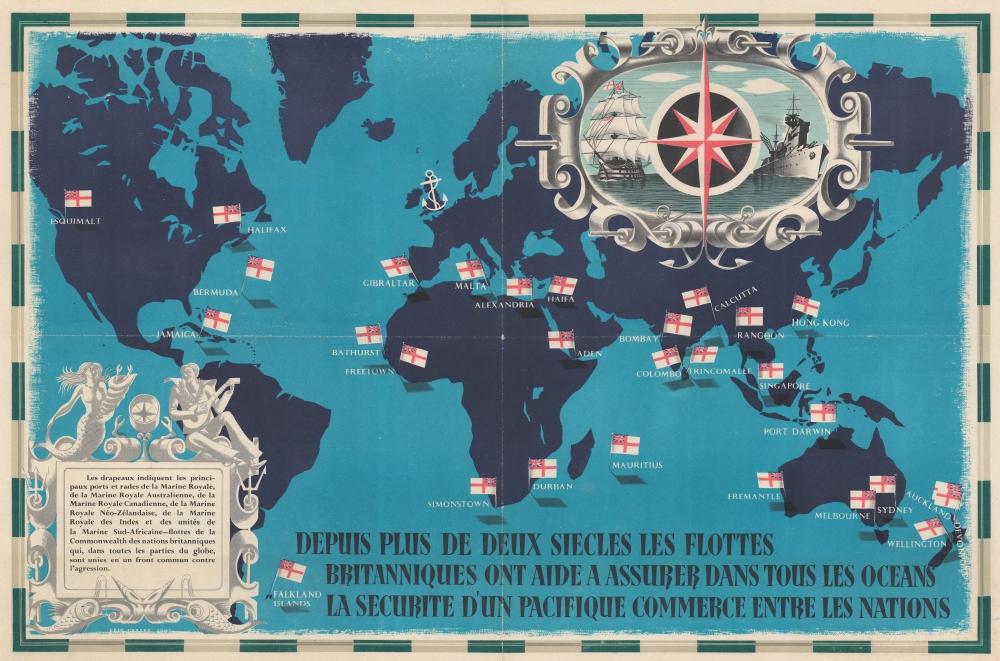 Published in Britain during World War II, this is a 1941 Eric Fraser pictorial persuasive map of the world highlighting British naval bases worldwide. The White Ensign, the official flag of the Royal Navy, marks bases from British Columbia to New Zealand, most of which were operated by Commonwealth nations, including the Royal Canadian Navy, the Royal Australian Navy, the Royal New Zealand Navy, the Royal Indian Navy, and the South African Navy. A beautifully stylized compass rose superimposed over illustrations of an old ship-of-the-line and a new, modern warship occupies the upper right.

The British Empire played a critical role in Britain's war effort, with some fifteen million Commonwealth, Colonial, and Imperial Indian citizens fought Axis forces under the British flag. The pervasive of British Naval forces influenced the Allied dominance of the seas throughout the war, protecting trade and supply networks globally. British Navy and Commonwealth ships fought in every major naval theater - at a heavy price. In 1941, when this map was issued, Britain commanded the world's most powerful navy By 1945, this position had been overtaken by the United States.

This map was created by Eric Fraser and published in 1941. Editions of this map were published in English, French (as here), Spanish, and Arabic. It is unclear who published this piece or any of the editions. We note examples of the French edition in the David Rumsey Map Collection and in the Princeton University Poster Collection at the Smithsonian National Museum of American History.

Eric George Fraser (June 11, 1902 - November 15, 1983) was a British graphic artist and illustrator. Born in Vincent Street, London, Fraser is best remembered for his contributions to the Radio Times. Before attending Goldsmith's college from 1919 - 1924, Fraser went to Westminster School of Art where he took W. R. Sickert's night classes. Fraser is also remembered as the creator of 'Mr. Therm' for The Gas Light and Coke Company, which debuted in 1932.. He also illustrated mythological scenes, dust jackets for books, and several of Shakespeare's plays. Also, he was the illustrator for the Folio Society edition of J. R. R. Tolkein's The Lord of the Rings. He married Irene Grace Lovett on April 4, 1925 at St. John's Church, Smith Square. He was also a muralist and created pieced for the 1923 and 1938 British Empire Exhibitions. Learn More...