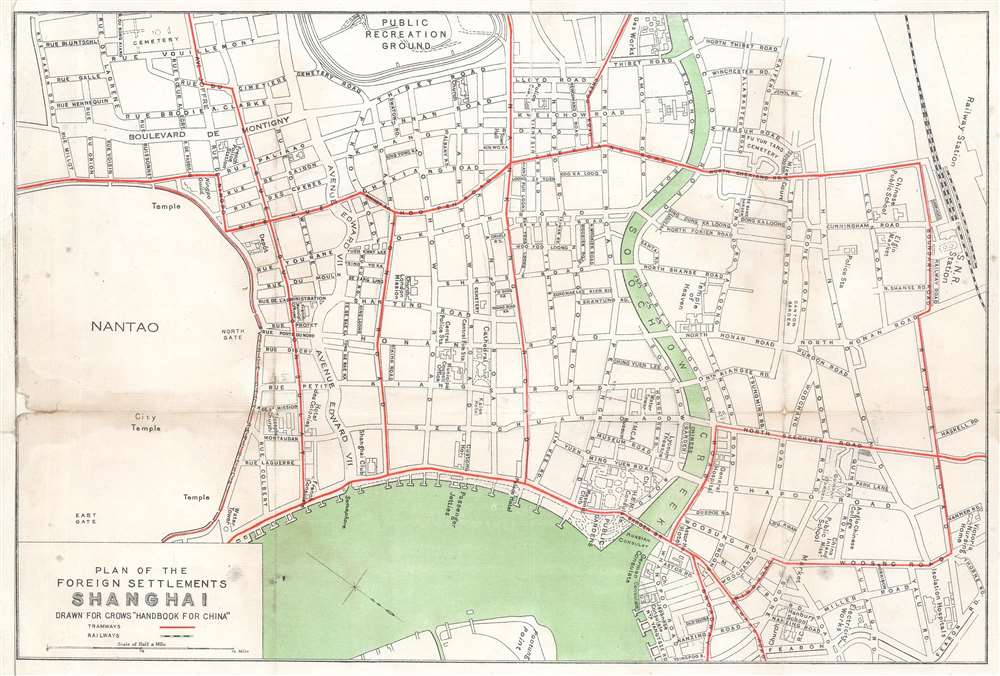 The Bund and the International Settlement.
$200.00

This is a c. 1921 Carl Crow city plan or map of part of the International Settlement in Shanghai, China. With the Huangpu River and the world-famous Shanghai Bund near the bottom border, the map depicts part of the British and French concessions. Streets are labeled throughout, along with the public recreation ground, several churches and cathedrals, hotels, the customs house, and the Shanghai Club. The British Consulate is identified as are the French municipal offices and the French Consulate.

The Shanghai International settlement was created in 1863 when the British and American Shanghai enclaves merged. These concessions had been granted to England and the United States as part of the Unequal Treaties that followed the Opium Wars. From about 1854 the settlements were governed by the Shanghai Municipal Council, a British dominated board of government officials and powerful merchants. The board issued restrictions limiting Chinese habitation on International Settlement territory and oversaw the construction of public services, including Trams, a sewage system, highways, and port buildings. The International settlement expanded several times in the late 19th and early 20th century. It became an enclave of peace and prosperity when the Japanese invaded Shanghai in 1837 but this abruptly came to an end with the Japanese bombing of Pearl Harbor and subsequent invasion of the International Settlement in 1941. After the war the International Settlement lands were returned to Chinese sovereignty.

This map was created by Carl Crow for publication in his Handbook for China c. 1921. An empty OCLC reference exists for this piece, suggesting that a former cooperative member created the entry before withdrawing from OCLC. This map appears on the private market from time to time.