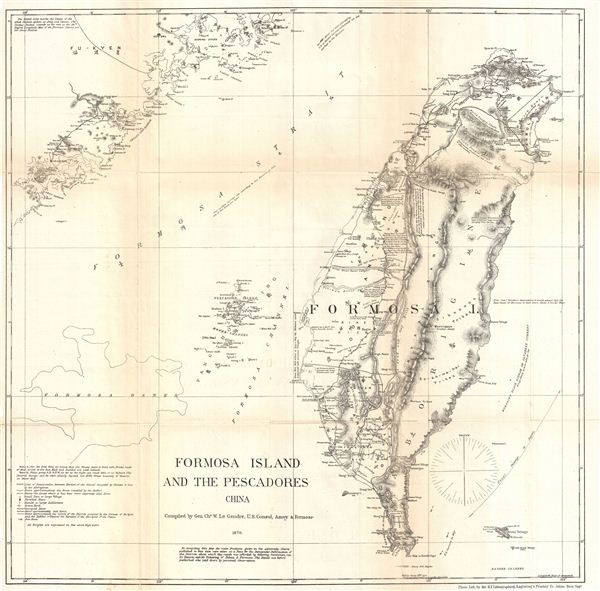 One of the first detailed map of the Taiwan / Formosa interior.

An extremely interesting, important, and uncommon map of Taiwan or Formosa issued in 1870 by the American Consul at Amoy, Charles W. Le Gendre. Focusing on the island of Formosa, this map covers from Fu-Kyen (Fukien), China to the Botel Tobago. Includes the Pang-Hoo-Ting Island, undersea features such as the Formosa Bank, and more inland detail than any map of Formosa previously published. This map originated with the unfortunate Rover Incident. The Rover was an American fishing vessel that shipwrecked in southern Formosa. Though the crew of the Rover was killed by the Taiwanese aboriginal population, it was widely assumed that they were alive and being held for ransom in the southern part of the Island. Le Gendre petitioned for and was granted the right to take an armed expedition into the region in the hopes of recovering the Americans. Though none of the Rover's crew remained alive, Le Gendre did succeed to producing the most sophisticated western map of the interior of Taiwan or Formosa to date. Though ostensibly a rescue mission, his study of Formosa is clearly laid out with commerce in mind, for his notes sugar growing regions, mineral (particularly coal) supplies, camphor districts, and woodlands are profuse. In the age of great steamships, coal was of particular interest as the U.S. need coal supply station in the China Sea region. It was known that the mountainous interior of Taiwan held considerable supplies of the precious commodity and part of Le Gendre's expedition involved finding ways to exploit it.

Reviewing this map one is immediately struck by the detail of western Taiwan as opposed to the relative emptiness of the eastern part of the island. At this time western Taiwan was a colony of the Fukien Chinese, just across the Formosa Strait. Their border extended inland to Taiwan's central range. Beyond the central Range was a little known region populated by diverse and often aggressively territorial aboriginal groups. The unique configuration of Le Gendre's Central Range, two large mountain chains embracing by an empty explored zone makes its first appearance here, but would be replicated on many subsequent maps; including British Admiralty Charts, well into the 1960s. This map was drawn by C. W. Le Gendre and engraved by Julius Bien of New York for publication in Le Gendre's 1874 Notes of Travel in Formosa

Charles William (Guillaum) Joseph Émile Le Gendre (August 26, 1830 - September 1, 1899) was a French-American diplomat active in East Asia during the second part of the 20th century. Born in Ouillins, France, Le Gendres came from a well connect family and attended both the Royal College of Rheims and the University of Paris. Around 1854 Le Gendre married an American, Clara Victoria Mulock (daughter of William Murlock) and moved to New York. During the American Civil War he served honorably and, despite being gravely wounded and losing an eye, rose rapidly in rank. He was discharged in 1864 with the brevet title of Brigadier General. Shortly following the 1865 close of the War, Le Gendre was dispatched as the American consul to Amoy China, in charge of the port cities of Amoy, Keelung, Taiwanfoo, Tamsui, and Takao. In this position Le Gendre traveled extensively throughout the region, earning the respect of authorities both in China and America. When the crew of an American fishing vessel, the Rover, was killed by Taiwanese aborigines following a shipwreck in southern Formosa, Le Gendre traveled to Taiwan. While his general purpose was to ransom presumed hostages from the Rover as well as prevent future hostilities, his secondary mission was to reconnoiter the island for trade. His detailed mappings for Formosa were by far the most advanced to date and were used in government issue charts well into the 1960s. In 1872 Le Gendre resigned his post as American Consul to take a position in the service of the Emperor of Japan, becoming the first foreigner to be employed in a Japanese government position. Le Gendre remained in the position until 1890 when he left Japan for Korea, where he took another advisory post. He held a position with the King of Korea until his death in Seoul on September 1 of 1899. Learn More...