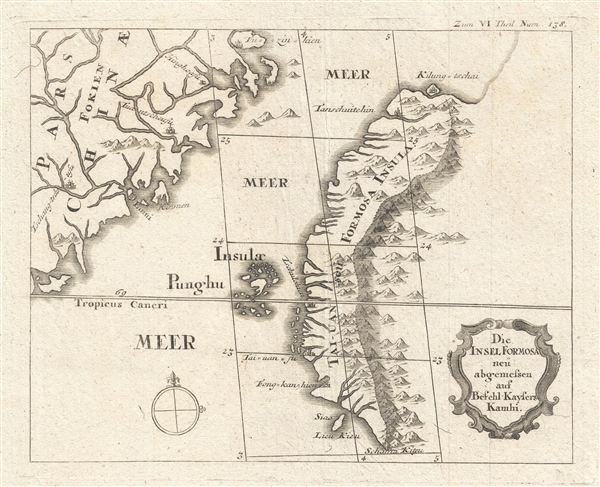 This rare find is one of the earliest, if not the earliest, obtainable printed map of Taiwan or Formosa Island. It was issued around 1726 to illustrate Joseph Stöcklein's [Stoecklein] compellation of Jesuit missionary letters Allerhand So Lehr-als Geist-reiche Brief, Schrifften, und Reis-Beschreibungen. The map presents the western part of Taiwan, the Punghu or Pescadore Islands, and the Fokien or Fujian coast of China. Several ancient Taiwanese cities are noted, including Keelung, Tainan, and what might be Kaohsiung. Like most early maps of Taiwan, only the Chinese portion, west of the Central Mountain Range (Zhongyang Range or Chungyang Range), offers significant detail. Here the tribal lands east of the Central Range are not only neglected but fade into the unknown. Another curiosity is the cartographer's decision to ghost in an extended Taiwan coastline leading north of Keelung. This gives evidence to just how little was known of Taiwan at the time. The only comparable map is Van Keulen's great map of Formosa, also published in 1726, that details the entire island. Of course, Van Keulen's association with the VOC (Vereenigde Oost-Indische Compagnie) offered him considerable access to cartographic material, most notabley the Johannes Vingboons manuscript map, that would have been out of reach of humble Jesuit missionaries. Today this map, like all early map of Formosa, is extremely rare.