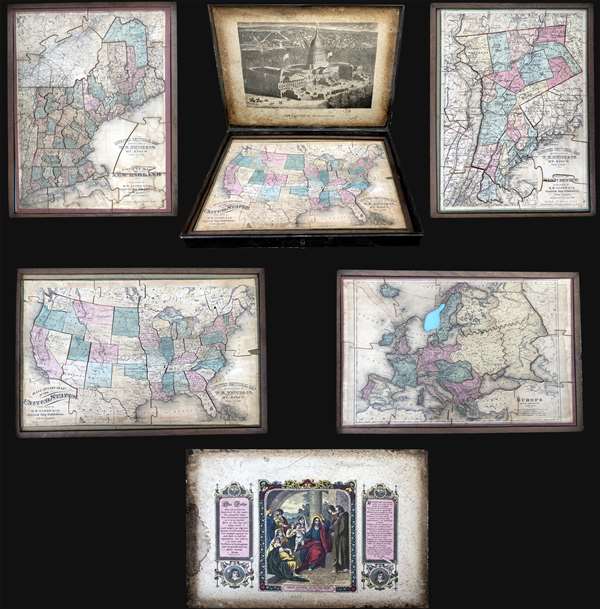 Railroad Map of the United States

The first puzzle depicts the continental United States from the Pacific Ocean to the Atlantic Ocean and from Canada to Mexico and the Bahamas. All the pieces are present, with each state (other than Rhode Island which is connected to Connecticut) separated into its own piece. Highly detailed, myriad cities and towns are labeled throughout the country, although the bulk of these are concentrated east of the Missouri River. As this is a railroad map of the United States, railroad lines are illustrated from coast to coast, although only a handful are labeled, including the Union Pacific and the Kansas Pacific. Certain lines, such as the Northern Pacific and the Southern Pacific, include dashed section, illustrating incomplete stretches of that line.

The second puzzle depicts the county of Westchester, New York. The map depicts the region from the west bank of the Hudson River to Ridgefield and New Canaan and from Garrison's and Lake Mahopac to Harlem and Manhasset Bay. Highly detailed, each township is shaded a different color to allow for easy differentiation. Towns and villages are illustrated and labeled throughout, including Peekskill, Bedford, and Tarrytown. Several railroad lines are illustrated by thick black lines, such as the Hudson River Division of the New York Central and Hudson Railroad. The Croton Aqueduct, which supplied drinking water to New York City from 1842 until 1940, is illustrated from the Croton River in Westchester County along the Hudson River to New York City.

The third puzzle depicts the continent of Europe from the Atlantic Ocean to the Caspian Sea and from the Arctic Ocean to the Mediterranean Sea and North Africa. Perhaps the most intriguing aspect of this map is the borders of Germany, which reflect German gains during the Franco-Prussian War when they took the provinces of Alsace and Lorraine from France. Austria-Hungary, the Central European monarchy, occupies part of modern-day Italy, and the Balkans are a part of the Ottoman Empire. One piece of this puzzle (Norway) is missing.

The fourth and final map of the set is a county map of New England depicting from Quebec and New Brunswick to Long Island and from New York to the Atlantic Ocean. Counties are labeled and shaded different colors to allow for easy differentiation. Meticulously detailed, innumerable cities, towns, and villages are labeled, including every stop on each illustrated railroad line. Both Nantucket and Martha's Vineyard are illustrated and labeled. The same level of detail is present in Quebec and New York State.

These maps were originally created by H. H. Lloyd and Company and the puzzles were manufactured by W. R. Price and Company of Mt. Kisco New York, whose imprint has been added to several o the maps. The four maps are accompanied by and stored in their original metal box, which includes the view of the United States Capitol Building on the lid and the painting titled Christ Blessing Little Children on the bottom. Each map is also contained in its own wooden tray for easy removal from the box