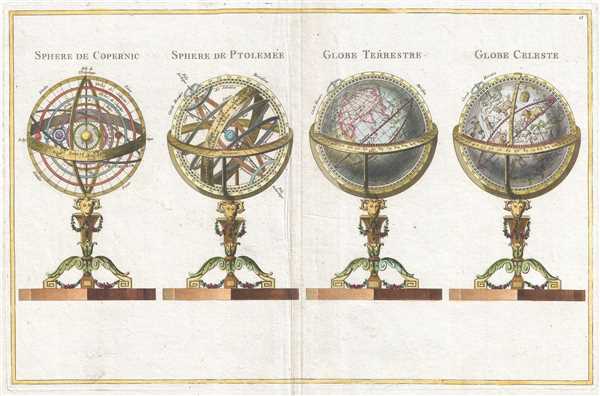 Illustrates the Ptolemaic and Copernican models of the solar system and the Earth and the constellations.

This is a 1763 Jean Janvier chart of four celestial spheres or globes. Each of the four instruments present a different astronomical phenomenon. The first, on the far left, illustrates the Copernican model of the solar system, while the one on its right depicts the Ptolemaic model. Each is composed of different celestial bodies, although the Copernican model includes more planets than the Ptolemaic one. The two globes on the right appear to be much more familiar, as one is a globe of the Earth and illustrates the Eastern Hemisphere, while the other is a celestial globe decorated by constellations.

This chart was produced by Jean Janvier in 1763.

Good. Wear and toning along original centerfold. Blank on verso.
Looking for a high-resolution scan of this?