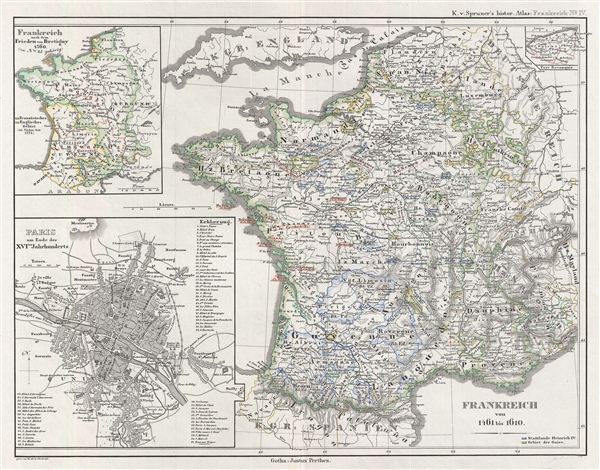 This is Karl von Spruner's 1854 map of France from 1461 to 1610. The map covers France from Calais in the north to the Spanish border in the south. In 1461, starting with the reign of Louis XI, France underwent a consolidation of monarchial power. From this point onward French Kings enjoyed nearly absolute power. Henry IV who ruled France until 1610 was instrumental in ending the French War of Religion by converting to Catholicism – the faith of most of his subjects. Two inset maps on the top left and bottom left detail France after the Peace of Bretigny in 1360 and Paris at the end of the 16th century. The Treaty of Bretigny, signed by King edward III of england and King John II (the Good) of France, marked the end of phase one of the Hundred Years' War. The whole is rendered in finely engraved detail exhibiting throughout the fine craftsmanship of the Perthes firm. Prepared by Karl Spruner for publication as plate F IV in the second edition of Justus Perthes' 1854 Historich-Geographischer, Hand-Atlas zur Geschichte der Staaten europa's vom Anfang des Mittelalters bis auf die Neueste Zeit.