1852 Bocage Map of France in Provinces 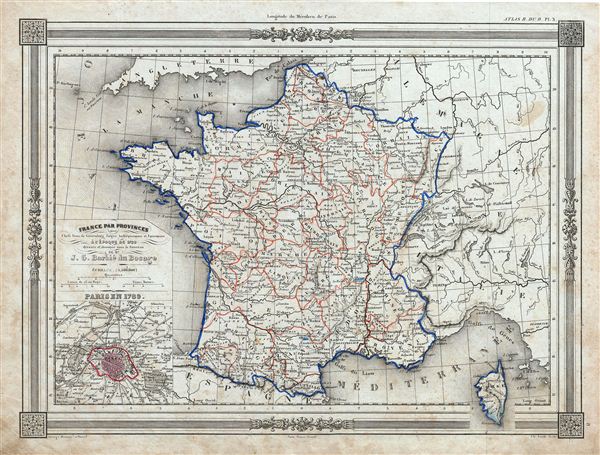 1852 Bocage Map of France in Provinces

An uncommon and extremely attractive 1852 map of France in Provinces. The map covers the Kingdom of France showing its various divisions according to province. It covers from the Flanders in the north to Roussillon in the south and from Brittany in the west to Alsace in the east. Also includes Corsica. An inset on the bottom left corner details Paris in 1789. Throughout, the map identifies various cities, towns, rivers and assortment of additional topographical details. France was organized into provinces until March 4, 1790, when the National Constituent Assembly reorganized the Provinces into Departments. The change was an attempt to eradicate local loyalties based on feudal ownership of land and focus all loyalty on the central government in Paris. There were roughly 40 provinces in France before they were abolished. The Map displays all provinces, including the province of Île-de-France, the center of power during most of French history. The map features a beautiful frame style border. Prepared by J. G. Barbie du Bocage for publication as plate no. 8 in Maison Basset's 1852 edition of Atlas Illustre Destine a l'enseignement de la Geographie elementaire.