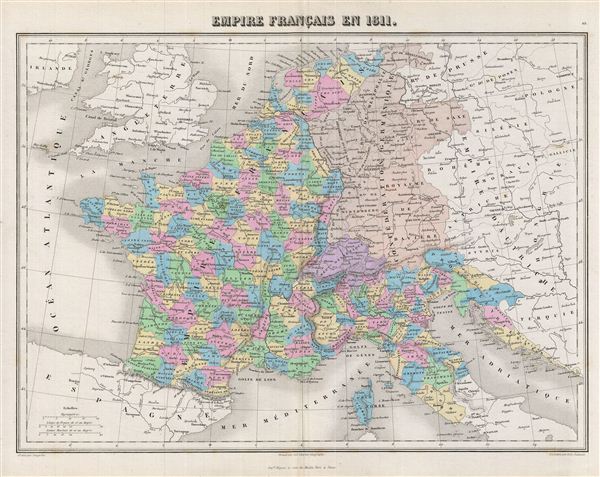 This is a fine example of J. Migeon's 1878 map of France. The map covers France divided into departments. It depicts the extent of the First French empire or the Napoleonic empire at its height in 1811. The empire included the modern day countries of France, Switzerland (here noted as the Helvetic Republic), Slovenia, Croatia, Belgium, Netherlands, Germany, parts of Italy and Austria. The island of Corsica is also included.

Three years after this map was drawn, Napoleon's escape and final defeat at Waterloo would end 22 years of almost continuous warfare (the French Revolutionary Wars from 1792-1802, and the Napoleonic Wars, 1804-1814).

Migeon identifies various rivers, mountain passes, lakes and other topographical features. Migeon's Geographie Universelle, published in Paris, is one of the last great decorative atlases of the 19th century. It contains many stylistic elements of early 19th century cartography such as full hand coloring, numerous decorative vignettes, and high quality paper. This map was issued as plate no. 10 in Migeon's Geographie Universelle.