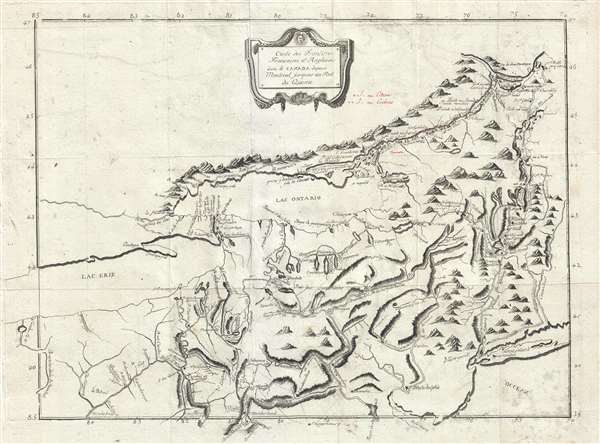 Important contemporary French mapping of the American theater of the French and Indian War.
$3,500.00

A rare and remarkable 1758/1781 idiosyncratically engraved map offering the engineer Pierre Pouchot de Maupas’ firsthand perspective on the French position in the French and Indian War (1754 - 1763). The map covers the primary American theater of the French and Indian War, extending from just west of Fort Duquesne (Pittsburgh) in western Pennsylvania to New York City and New Jersey, and from the Delaware Bay to Montreal, illustrating the full course of the Hudson and St. Lawrence Rivers.

I have handed to the Marquis de Vaudreuil, a map and memoir, on the subject of the French and English frontiers which I have drawn up on the best informations I have been able to procure, during my sojourn at Niagara. I have laid down in my voyages, the course of the river from Montreal, Lake Ontario as far as Lake Eire; therefore it has an appearance of truth which correctly represents the country and is not contained in any other maps. As I have not been on the English frontier, I laid that down according to their best maps, which I again corrected on such reliable information as I have obtained. It is in sufficient detail however, to show the interest we ought to take to prevent the English interposing obstacles in the way of the Iroquois and Loups, who from a barrier. That country, my Lord, would be well worth being seen by experienced eyes, which has not yet been the case; the well known carrying place of Niagara is an evident proof. The most recent accounts thereof, describe it as the most rugged of Alps, whilst 'tis only a rise of ground, a little more elevated that that of Bellvue. Below and above are very fine plains, as can be seen on my map.

Pouchot's letter defines the map as having been drawn in America prior to 1758, during the French and Indian War. It is unclear if it was engraved or printed in America, but the style overall is idiosyncratic, as will be discussed later.

The Theater of War through French Eyes

Pouchot was a military engineer whose specialization in fortifications was critical to the French war effort. During the course of the French and Indian War, he was dispatched throughout the region to shore up defenses and manage siege works. Not only was he present during many of the war’s most significant battles, but was also captured twice and sent to New York as prisoner of war – where he earned the respect of his British captors and was treated as a gentleman. As such this map offers a remarkable contemporaneous (1755-1759) overview of the theater of war as it was understood by the well-educated and well-traveled French engineer.

Emphasis throughout is given to inland transportation networks, including roads and navigable riverways, as well as to fortifications, all of which would have been essential to the French war effort. Among the forts noted are Fort Duquesne (Pittsburgh), near which the location where the French clashed with George Washington in 1754 is identified by crossed swords. Other forts identified include Fort Chougen (Oswego), Fort Niagara, Fort Presque Isle, Fort Cumberland, Ft. La Presentation, Ft. Levis, Fort Chambly, Ft. St. Jean, Fort Carillon, Fort St. Frederic, Ft. William Henry, Fort George, Ft. Hunter, and others.

Several finely executed red inked manuscript annotations are evident on all surviving examples of this admittedly rare map. These refer to Pouchot’s travels along the Saint Lawrence River. Starting near Montreal, numbered indicators illustrate Pouchot’s journey up the St. Lawrence. En route, he visits the Mississauga Indian island village of Toniata (Grenadier Island), as well as the small river islands identified here as I. au Citron and I. au Cochis. The voyage is recorded in Pouchot’s narrative, where he writes of Toniata,

At five leagues from Point au Baril is the Island of Toniata. The main channel of the river is between this island and the south shore. The north part of the river is filled with rushes, and in summer, it is famous for a thriving eel fishery.

M. de Frontenac gave this island to an Iroquois, and the latter sold it for four pots of Brandy to a Canadian, who would have in turn sold it back for a beaver skin.

The numbered manuscript references are as follows: Pouchot’s Memoirs

Pouchot’s 3-volume history, Mémoires sur la dernière Guerre de l'Amérique Septentrionale entre la France et l'Angleterre, within which this map was contained, was written shortly after the events described therein, but was not published until 1781, well after his death. While his Mémoires were hastily composed with motives of self-vindication and doubtless exaggerate his own achievements, they are a valuable record of the war, particularly the sieges of Forts Niagara and Fort Lévis. Pouchot discusses low morale among the French troops, the corrupt French colonial administration, particularly the transgressions of Bigot, Cadet, Le Mercier, and Péan, and provides detailed accounts of the topography of Canada, and native warfare, mannerism, and customs. Streeter refers to it as a 'contemporary authority of the first importance from the French point of view.' The historian Justin Winsor praises it as ‘foremost among the special histories of the war . . . ,' emphasizing its value to ‘the study of topography, so far as it was known and of the geographical nomenclature of the frontier just previous to the outbreak of the Revolutionary War . . .'

Date of the Map, Known States, and More

In the aforementioned letter dated 'Montreal, April 14, 1758,' probably just before departing on the journey illustrated here in manuscript, Pouchot mentions this map and his memoire, suggesting that they must have been prepared in America around that time. This may explain both the red manuscript annotations postdating the creation of the map, and the unusual engraving style, betraying an unpracticed yet elegant hand, possibly Pouchot’s own.

For political reasons, neither the narrative nor the map were published immediately following the war. Instead they languished for some 14 years after the author's death, before being published din Yverden, Switzerland in 1781. Franklin B. Hough, who translated the narrative into English in 1866, from the Harvard example, suggests this delay and the subsequent Swiss imprint may relate to censure by the French regime over Pouchot's harsh critique of the colonial administration. A lithograph variant of the map was also published in the Hough translation, but with various updates and revisions.

Pierre Pouchot de Maupas (April 8, 1712 – May 8, 1769) was a French historian, military engineer, and army officer in the French regular army active in Europe during the War of Austrian Succession and in America during French and Indian War. Pouchot was born in Grenoble, France, the son of a merchant. He joined the army at 21 as a volunteer engineer and was appointed second lieutenant in the Régiment de Béarn on May 1 of 1734. During the War of the Austrian Succession, his engineering service earned him a Cross of the Order of St. Louis and, in September 1748, a commission as Captain. Later, during the French and Indian War, he was assigned to the Canadian theater, serving at Fort Frontenac (Kingston, Ontario) and Fort Niagara (Youngstown, NY), where his engineering expertise helped to shore up the crumbling defenses. In July and August of 1756, his unit was assigned to lay out the siege works for the Battle of Fort Oswego (Chouaguen), in upstate New York. Afterwards, he moved between forts, including Frontenac, Ticonderoga, Montreal, Niagara, and Rouillé (Toronto), as needed. He developed strong relationships with France's American Indian allies especially the Cayuga, Onodaga, Delaware, Shawnee, Mississagua, and Seneca who called him Sategariouaen or Sategayogen, meaning 'the center of good transactions.' He was nonetheless captured by the British following Sir William Johnson's successful siege of Fort Niagara. Johnson treated him as a gentleman and, it is said, before Pouchot returned to Montreal from New York, he hosted a dinner party for the British officers. After the war he returned to France, where he compiled an important memoire of the French and Indian War, Mémoires sur la dernière guerre de l'Amérique septentrionale entre la France et l'Angleterre, considered the most accurate French perspective narrative of the war from an actual soldier. Later, he joined French forces occupying of Corsica. There, in 1769, while reconnoitering a post, he was killed. His memoire was published posthumously in 1781. Learn More...