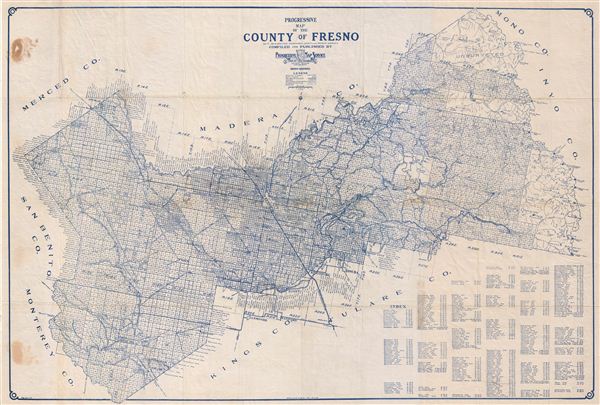 An appealing c. 1920 map of Fresno County, California by the Progressive Map Service. Printed in blue ink, this pocket map covers all of Fresno County broken up into land plats by the state survey. The city of Fresno is located at center. Today, Fresno is California's third largest city. This map is notable as one of the few map of Fresno actually published in Fresno.

The Progressive Map Service (fl. c. 1910 - c. 1945) was a American map publishing company active in Fresno, California, during the first half of the 20th century. The firm, which was owned and run by Dan W. Chamberlin, specialized in southern California city and county maps. Most of their maps are a synthesis of government, county and private survey work. Unfortunately, little is known of Chamberlin or the company's operations. Learn More...

Very good condition. Minor wear on originally fold lines. Some discoloration where originally attached to cardboard binder. Professionally flattened and backed with archival tissue.
Looking for a high-resolution scan of this?