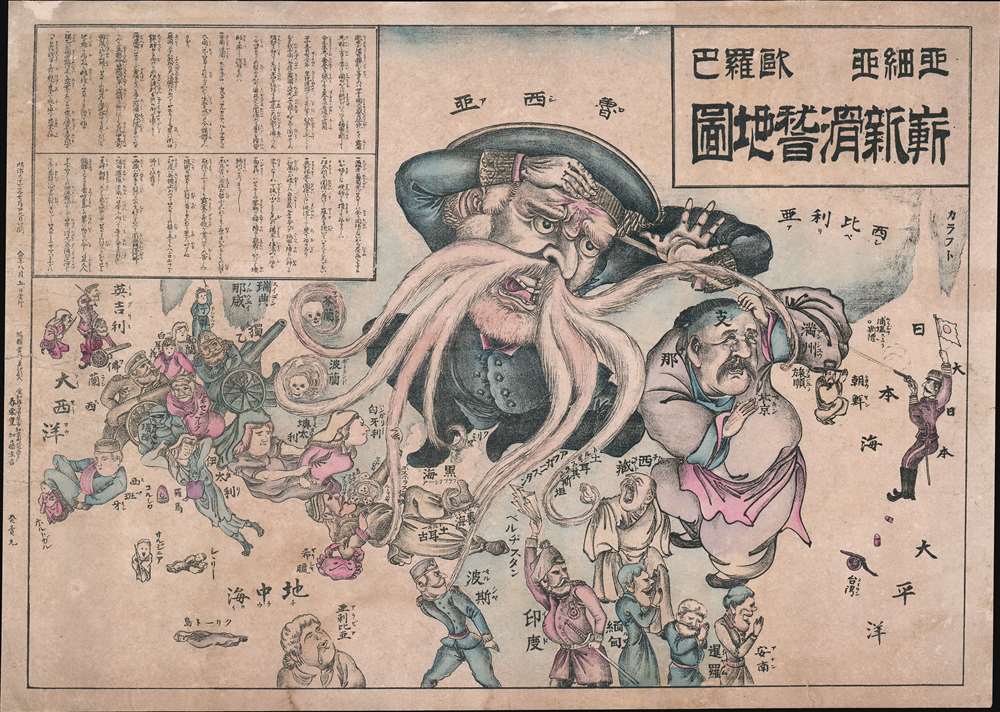 The holy grail of Japanese Russo-Japanese War (1904 - 1905) chromolithograph serio-comic maps, this is Haru EiDō's July 1904 map lionizing Japanese victories and staging Japan as a major world power and the 'protector' of Asia. This is one of four serio-comic style maps issued sequentially from April through July, 1904, to illustrate and propagandize Japan's near-continuous victories over Russian forces. Unlike some of the others, which also included English content, and therefore were presumably intended for distribution both within and without Japan, this map was intended exclusively for Japanese audiences.

The map broadly covers all of Europe and Asia. Russia, appearing front and center as a bearded and stereotypically Jewish old man (see below), takes a bullet to the head, which not ironically resembles a rising sun. China turns away from Russia in fear, and looks towards Japan for aid. Korea, Southeast Asia, and Burma acknowledge Japanese greatness, while Taiwan is a cannon pointed towards China. European countries are depicted as lethargic and lazy, with the exception of Hungary, which is being restrained by Austria. Arabia, at bottom, look on with envy.

Why is Russia Satirized as a Stereotypical European Jew?

It is impossible to mis or mis-interpret the distinctly Semitic appearance of the Russia-figure, from the stereotypical 'Jewish nose' to more traditional wardrobe elements such as the black dress, cuffs, vest and hat. Even the tendrils of the beard might be seen to resemble the Peyot, traditional Jewish sidelocks. Japanese people had very little experience of the Jewish community before the Russo-Japanese War. Some argue it was not until 1918 that they discovered Anti-Semitism - from Russians. This map suggests something different. During the later years of Tsarist Russia, Russian Jews were increasingly marginalized and placed under 'residency restrictions'. Although most settled in Belarus, Ukraine, Lithuania, and Russian-controlled parts of Poland, a significant population migrated to the Russian Far East, particularly Harbin, a liberal cosmopolitan city far from the emperor they could enjoy greeter freedoms. In Harbin, the Jewish population thrived, acquiring political and economic influence, so much so that Harbin was called the 'Jerusalem of the East' and ' Happy Horvathia.' During the Russo-Japanese War, Harbin, the terminus of the Russian controlled Chinese Eastern Railway, functioned as a supply depot and command center for Russian forces. More than 30,000 Jews were called up to fight for Russia against the Japanese. Many of these captured and interred in Japanese prisoner-of-war camps. From the Japanese perspective, it must have seemed like Russia was a predominantly 'Jewish' state - although this could not have been farther from the truth.

(What did Japan think of itself?)
(Russian outlaws devour weaker countries. With more than 2500 years of arrogance, they do not know remorse. Our country punishes Russia and is playing an active part to help a neighboring country [China].
(If here we explain Russia and the relations of all the countries of the world as a humorous map.) Finland, Poland, Montenegro, Serbia, Bulgaria, Rumanian, six countries, are coiled around the Russian mustache, and lifeblood has been drained. Already they have become skeletons.
The rich nations do not fight. The United Kingdom watches on the sidelines.
France has become Russia's bank.
Germany is disgusted with tyranny of Russia. He watches the Russo-Japanese War with folded arms.
Spain and Portugal are indifferent to Russia, and they take a nap.
Italy has no time for it with Roma.
Arabia is also just looking on, drooling.
Let sleeping dogs lie.
Ms. Netherlands, Belgium, Luxembourg, and Swiss exhibit wisdom.
Denmark is a proud small independent country.
Hungary was about to fight, saying, 'I do not like behavior of Russia, but Austria restrains her.
Turkey has been bitten in Greece in an attempt to avoid the mustache.
Persia wrapped in the Russian mustache, is choking.
The moustache has Tibet's right hand.
Burma, Siam, Annam can naught but thanks Japan.
China and Korea which were saved from the Russian mustache, depend on Japan.
So, fired bullets to redden the beard of Russia that has reached for Japan.
The ridiculousness of Russia defeated.

The content also draws considerable meaning from indirect iconographic quotes from previous map of this series, including the Ohara map, A Humorous Diplomatic Atlas of Europe and Asia, and European precursors like Fred Rose's map. The use of skulls to represent defeated nations, death, and massacres are one such example.

This map was printed in Nagoya, Japan, by Haru EiDō (春榮堂) or 'Spring Studio.' The artist is unknown. It was printed on July 29, 1904 (Meiji 37) and released on August 5th of the same year. There are only two known surviving examples of this map, this being by far the best of the two.

Haru Eido (春榮堂; fl. c. 1904 - 1905), or Spring Studio, was a Japanese lithographic publishing firm based in Nagoya, Aichi Prefecture, Japan. The firm focused on chromolithographic prints, many of which appeared during the Russo-Japanese war (1904 - 1905).

Good. Some minor verso repairs. Even toning.
Looking for a high-resolution scan of this?