1744 Bowen and Cowley Map of the Galapagos Islands 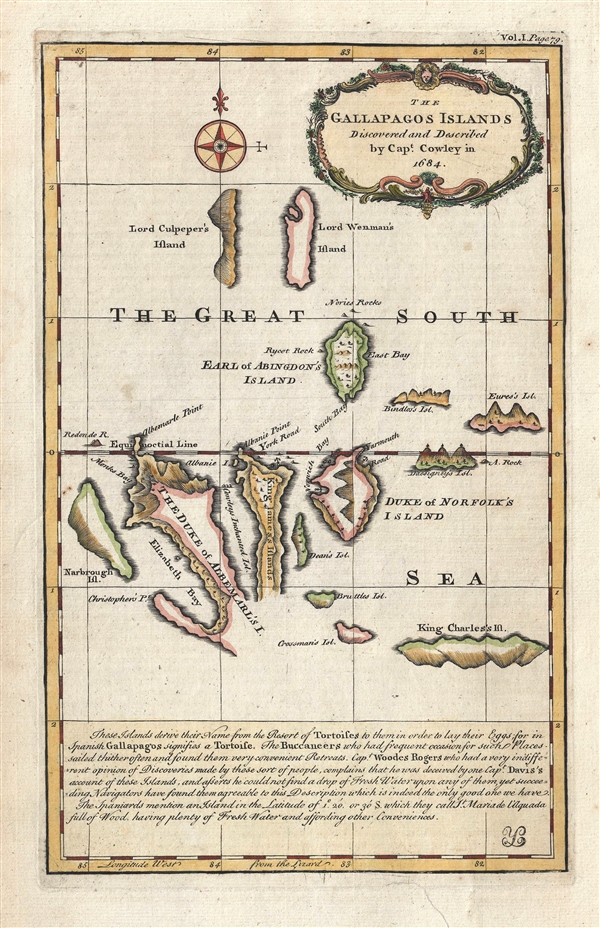 1744 Bowen and Cowley Map of the Galapagos Islands

The earliest obtainable specific map of the Galapagos Islands.

This is one of the earliest obtainable specific maps of the Galapagos Islands. The map tentatively covers the islands and is attributed to Captain William Ambrose Cowley. The map claims that Cowley discovered the islands in 1683, but in fact they were know to the Spanish as early as 1535. Nonetheless, they were not fully described until the English ship, Bachelor's Delight, landed on the islands in 1683. The crew consisted of a number of august personages including William Dampier, Lionel Wafer, Ambrose Cowley and Edward Davis. It was during this visit that Cowley laid down the cartography seen here. Although not exceptionally accurate, the basic outline of most of the islands is identifiable. Cowley has here named the islands in an attempt to flatter British nobility, Islan Fernandia is here Narborough Island, Isla Isabela is Due of Albemarle Island, Isla Santiago is King James Island (and in fact, Santiago is a Spanish form of James), Isla Santa Cruz is here the Duke of Norfolk Island, etc.

Despite the general inaccuracy of Cowley's map, it was the best available map of the Galapagos Islands and remained so for nearly one hundred years until 1798 when Aaron Arrowsmith and James Colnett published their map. Of course the Galapagos Islands grew large on the world stage after Charles Darwin's 1835 visit on the HMS Beagle led to his detailed descriptions of the remarkable flora and fauna to be found there. It was only after this voyage that Captain Robert FtizRoy and the British Admiralty published a truly accurate map of the islands.

Below the map proper a text blog describing the naming of the islands and offering an anecdote regarding the privateer Woodes Rogers criticism of Edward Davis' account of the islands. Apparently Rogers was unable to find water despite the success of other navigators.

This map was drawn and engraved by Emmanuel Bowen and published in John Harris's Navigantium Atque Itinerantium Bibliotheca… in 1744.