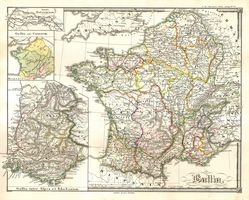 This fine hand colored map is a steel plate lithograph depicting France, Gaul, or Gallia in ancient times. There are large insets of Batavorum and France/Gallia after Caesar. It was published in 1855 by the legendary German cartographer Justus Perthes. Issued as part of the 'Spruneri Atlas Antiquarie.'