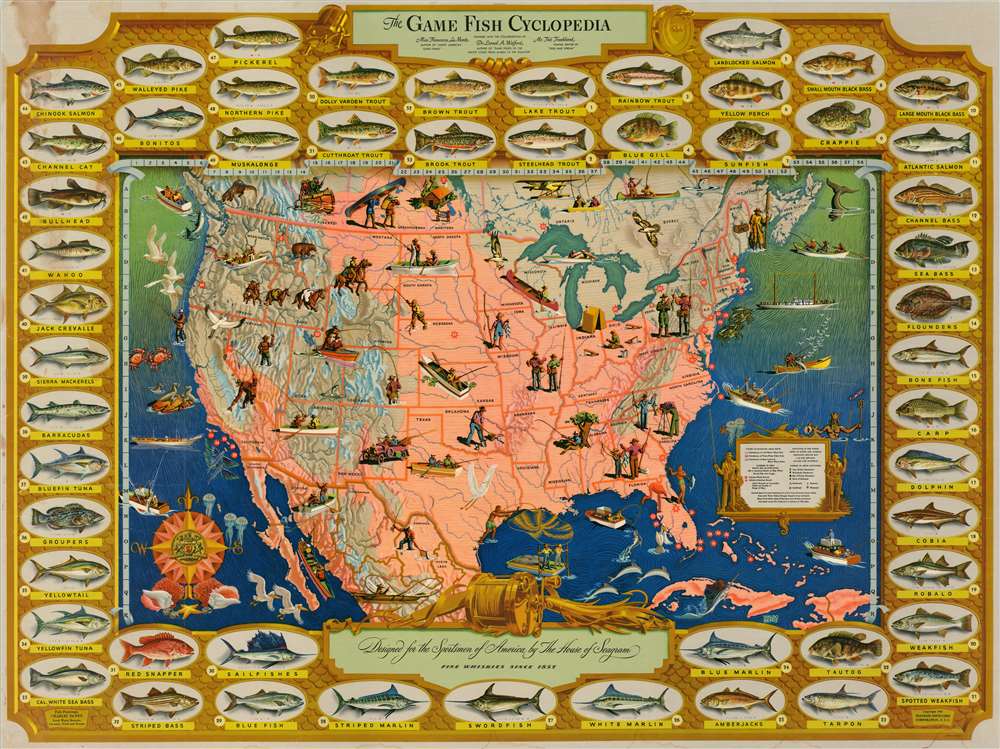 An angler's guide to America.

This is a 1947 Waldo Bemis pictorial fishing or angling map of the United States. Depicting the entire continental United States, Bemis uses shading to indicate the distribution of warm-water fish, cold-water fish, and areas where one could potentially find either warm- or cold-water fish. Red circles and stars with white numbers appear throughout, although the vast majority are along the coastlines. These indicate locations where record fish were caught of each of the fifty-three species of fish illustrated in the border. All these notations are explained in a key situated in the lower right quadrant. Vignettes of fishermen are included across the United States, all of whom are experiencing a different degree of success. Vignettes of fishing animals, such as otters, brown bears, seals, and wading birds, also add to this map's appeal.

As stated above, fifty-three species of fishes are illustrated within the border. These paintings, done by Charles DeFeo, were celebrated works of art and were faithfully reproduced here. Each fish's plaque bears the grid coordinates of the record catches, some of which, amazingly, happened in two different locations, and the border as a whole consists of fish scales.

This map was drawn by Waldo Bemis and the fish paintings were done by Charles DeFeo. The whole was compiled by Francesca La Monte, Lionel A. Walford, and Ted Trueblood for the Sportsmen of America and published by the Seagram-Distillers Corporation of New York City in 1947. The OCLC catalogues examples as being part of the institutional collections at the University of Wisconsin – Milwaukee and Stanford University.

Waldo Edmund Bemis (July 26, 1891 - September 9, 1951) was an American artist, illustrator, and designer. Born in Covina, California, Bemis studied art at the Los Angeles School of Art and Design and the University of California, Berkeley. He was a veteran of World War I and spent most of his life in California. Bemis moved to New York in 1928 and spent twenty-two years in the city and made a name for himself as an artist. He returned to California in 1950. He married his wife Margaret in 1917 with whom he had two sons. Learn More...


Charles DeFeo (1892 - 1978) was an American artist and illustrator best known for his wildlife and fish portraits. DeFeo was born in New Castle, Delaware and studied under Howard Pyle in Wilmington before leaving school and moving to New York where he spent the rest of his life. He continued his art studies in New York, and soon gained a reputation for his fish and game bird illustrations. As a young man, he also made a living creating cover art for sport and detective magazine. In the 1940 and 1950s, his fish and bird paintings were used by the Seagrams Company in prized annual calendars. DeFeo was also a world-class fly fisherman known for tying elaborate flies. He often fished with the baseball great Ted Williams, and the pair sometimes would go fishing in South America during the off-season. DeFeo was married to Bessie W. Slade for more than thirty years. Learn More...