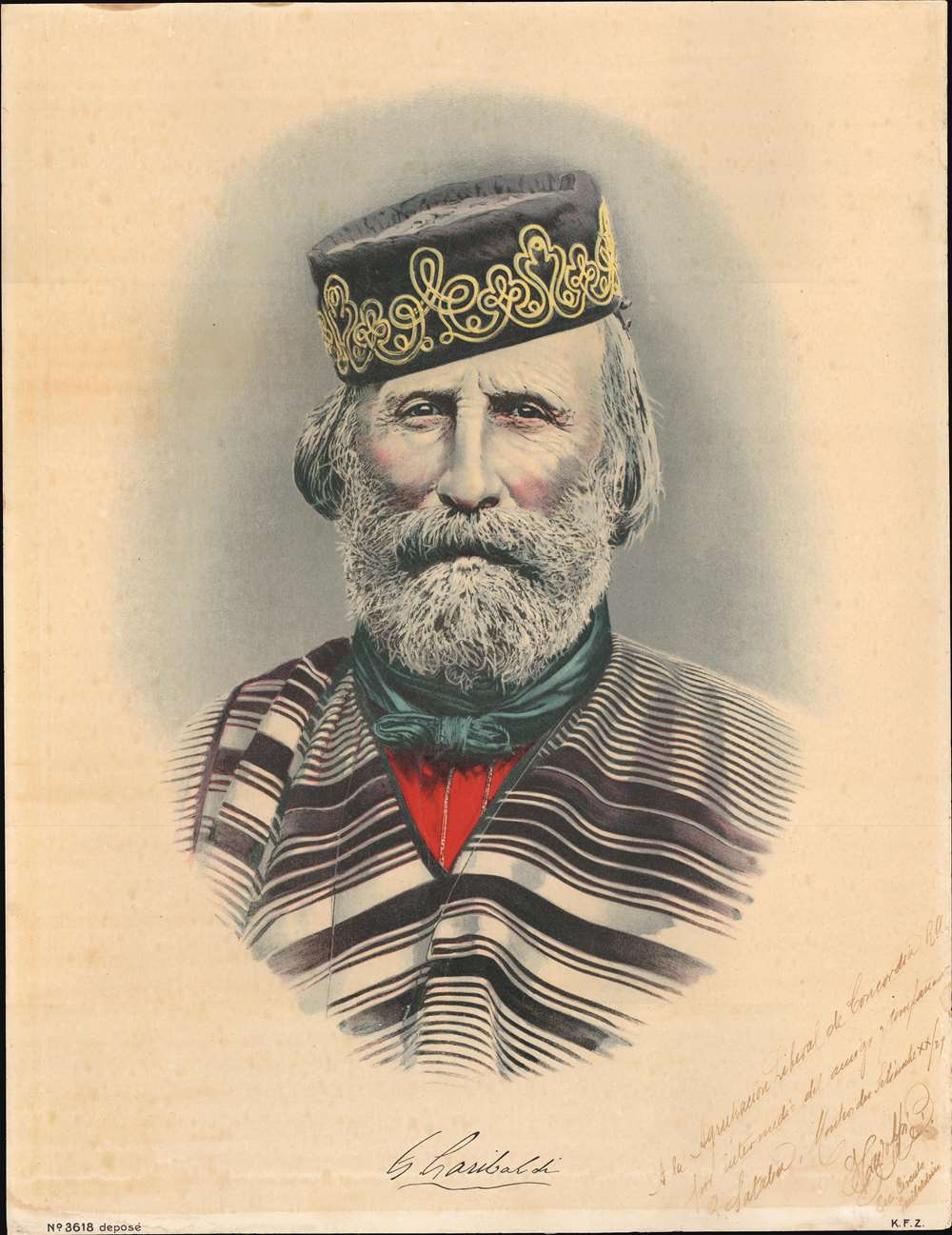 This is a c. 1929 chromolithograph portrait of the Italian hero of solidarity Giuseppe Garibaldi. The chromolithograph is based on a photograph of Garibaldi taken by the Alinari Brothers c. 1866. He is illustrated wearing his trademark red shirt and poncho. His volunteers, the Garibaldini, wore red shirts in lieu of a uniform.

A dedication, written in manuscript appears in the lower right corner and reads

Although we have been unable to completely unearth every detail surrounding this dedication, we have been able to glean some relevant details. From Garibaldi's biography, we know that he played an important role in Brazilian, Uruguayan, and Argentine history. We also know that the 'Círcula Garibaldino de Montevideo' was founded by Carlo Novello, although it is unclear exactly when. The 'Festa d'Italia' or the 'Festa di Garibaldi' was established in 1909 and is celebrated annually on September 20. Thus, by connecting all the dots, this dedication represents a gift from the Círcula Garibaldino de Montevideo to the Agrupación Liberal de Concordia on the 'Festa di Garibaldi' in 1929.

Giuseppe Garibaldi (July 4, 1807 - June 2, 1882) was an Italian general to played an important role in Italian unification. Born in Nice in the Kingdom of Sardinia, Garibaldi participated in an uprising in Piedmont, was arrested, and sentenced to death. He escape and fled to South America, where he spent the next fourteen years.

Garibaldi arrived in Brazil, by way of Tunis, in December 1835. He joined the rebels known as the Ragamuffins and fought in the Ragamuffin War of 1835. While with the Ragamuffins he met Ana Maria de Jesus Ribeiro da Silva, known as 'Anita'. Garibaldi and Anita fought side by side in the battle of Imbituba and Laguna aboard Garibaldi's ship, Rio Pardo. He and Anita, moved to Montevideo, Uruguay, in 1841, where Garibaldi worked as a schoolmaster and trader. Garibaldi and Anita married a year later. He took command of the Uruguayan fleet in 1842. That year, he also raised an Italian Legion, known as the Redshirts, to fight in the Uruguayan Civil War. Garibaldi defended Montevideo from attack between 1842 and 1848 and won several victories, some of which were controversial.

Return to Italy and Italian Unification

Garibaldi returned to Italy in 1848 and became one of the founders of the Action Party. He fought in both the First Italian War of Independence, on the losing side, and was once again forced into exile. He returned to Italy in 1854 and spent the next five years on an island north of Sardinia. After the Second Italian War of Independence broke out in 1859, Garibaldi was appointed a major general, and helped organize the Campaign of 1860, which eventually led to the unification of Italy.

This chromolithograph portrait was produced by unknown artists and published c. 1929 by K.F.Z. Switzerland. We have been unable to locate any other surviving examples.

Very Good. Mounted on card. Manuscript dedication in lower right.
Looking for a high-resolution scan of this?