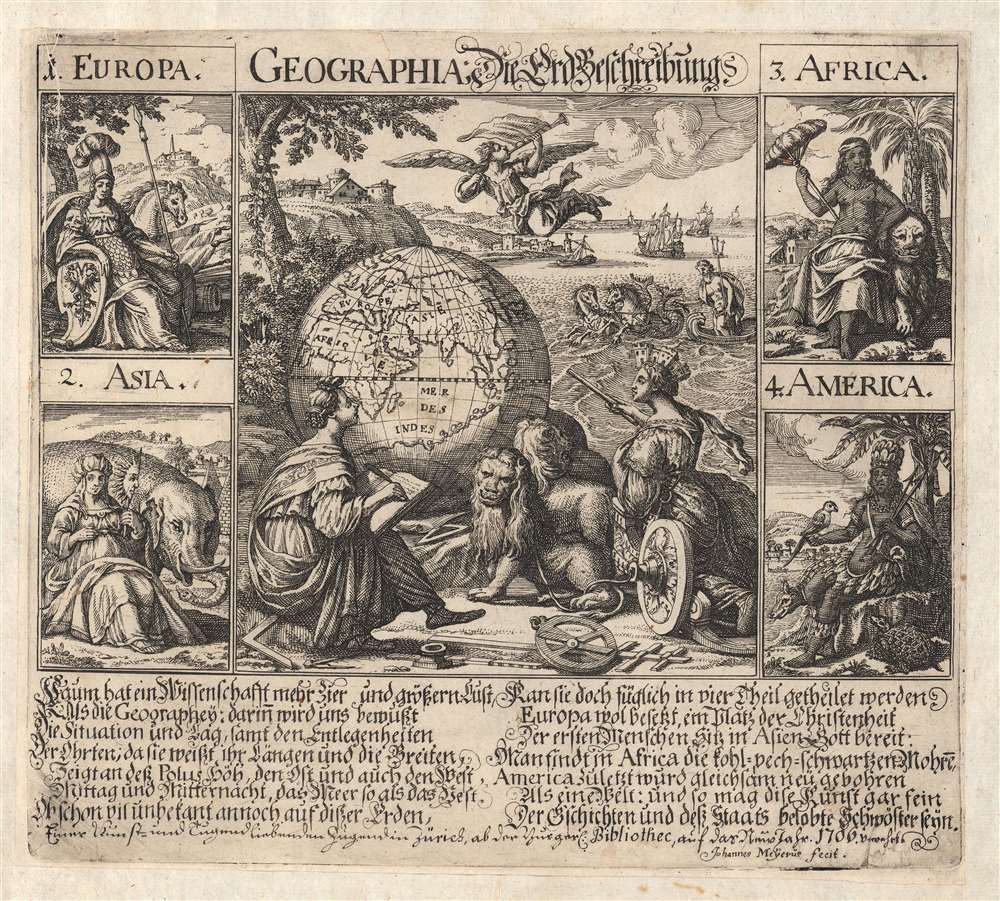 This is a rare, 1706 Johannes Meyer broadside dedicated to the science of geography, showing allegorical representations of the continents and a globe. It includes a German text describing the purposes of geography as well as briefly describing the four parts of the world: Europe, Asia, Africa, and America.

Beginning in 1645 and continuing until 1939, the council of the Burgerbibliothek Zürich (Zürich Public Library) celebrated the new year by printing a broadsheet for the children of the city. These New Year's papers, Neujahrsblättern, were attractively engraved works intended to promote study at the library, particularly of the sciences. They were first created by the poet and theologian Johann Wilhelm Simler (1605 - 1672), and Zürich engraver Conrad Meyer (1618 - 1689), and were the first instances of printed broadsheets combining text and image for educational purposes. After the deaths of Simler (1672) and Meyer (1689), Conrad's son Johannes took over this duty along with the rest of the business; Johannes appears to have developed his own work rather than simply reprinting his father's: we are aware of other examples of Johannes' Neujahrsblättern focusing on the sciences, namely his Physica (1697) and Mathematica (1699). These were separately issued works - not bound in a book - and were moreover intended for the use of children, and consequently very few survive. This is a pity, because the topicality of each annual Neujahrsblättern provides a unique view of the theological, political, social and historical issues affecting Zürich at the time. The present example was printed to celebrate the New Year of 1706.

'What science is loftier than Geography?' opens the fourteen-line poem at the bottom of the sheet. It (extremely) briefly praises geography's ability to show the situation of the world, its poles and directions, and its power to reveal the remote parts of the world. It goes on to reduce, to one line apiece, the entire idea of Europe, Asia, Africa and America. The engraved image is divided into five parts. Four of these represent the four parts of the world, using iconography made familiar in the cartographic decoration of the previous century: each continent is allegorically represented in the form of a woman. The central vignette appears to be dedicated to Geography itself. A great globe dominates the middle of the image: the eastern hemisphere faces the viewer, showing the continents Europa, Afrique and Asie and the Mer Des Indes. (Note that the globe is French, in a nod to the preeminence of that nation in exploration and mapping at the beginning of the 18th century.) A muse, Clio or perhaps a generic 'muse of Geography', happily records her observations in a book, with the tools of the geographer littering the ground. Seated in a chariot wearing a remarkable hat in the shape of a city is Helvetia - the personification of Switzerland. Her chariot is pulled by lions, representing Zürich. She gestures at the obscured part of the globe with a rod, as if to demand 'what about THAT bit?'

The background may indicate what 'THAT bit' might reveal: cities on distant shores, ships plying an ocean (we know it's an ocean because Poseidon is also in it, with his sea-chariot and hippocampi. Above the whole scene, an angel on the wing trumpets away.

This copperplate engraving was executed in late 1705 for its 1706 publication in Zürich; we are aware of only one edition, and it appears that the Neujahrsblättern were not reprinted or re-used. It was separately issued, and most examples would not have enjoyed the protection of a book. This example has, at some early date, been laid onto a larger sheet of laid paper- probably in order to bind it into a larger book, which has resulted in the remarkable survival of this extremely rare engraving. OCLC catalogues a single copy in the Zentralbibliothek Zürich. We have encountered no other copies on the market.

Johannes Meyer the Younger (1655 – 1712) was a painter, engraver and publisher of Zürich, Switzerland. He was brought up in the trade by his father, Conrad Meyer (1618 - 1689) of the same city, who had been a student of Matthäus Merian. Conrad was successful and prolific, producing more than a thousand works, among them Conrad Gyger's 1657 map of Switzerland and his own 1681 Planisphaerium Coeleste . Both Johannes and his father had engraved many of the Neujahrsblättern - 'New Year's Papers - printed by the Burgerbibliothek Zürich as New Years' gifts to the children of Zürich. Learn More...

Very good. Pasted down to a larger sheet for binding, with no mends.