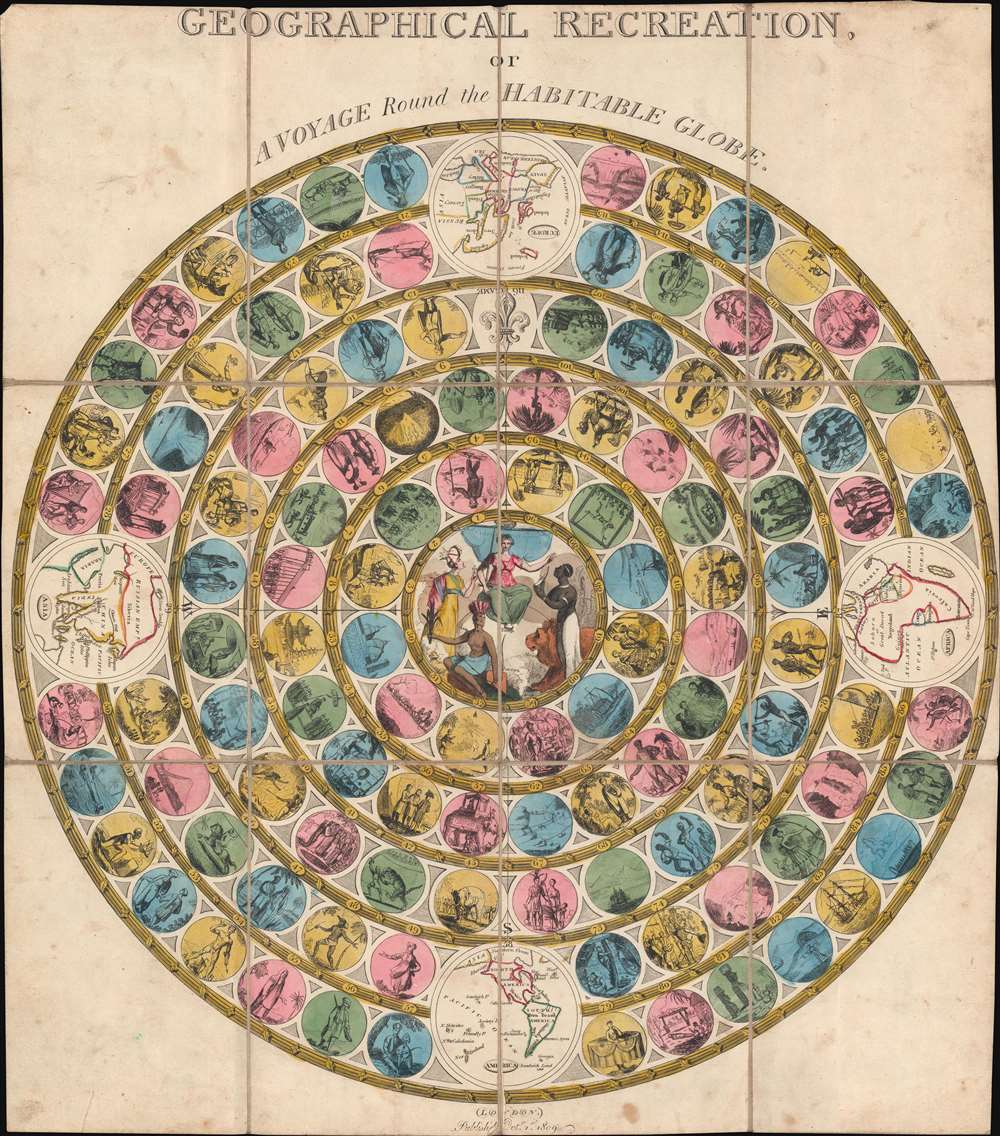 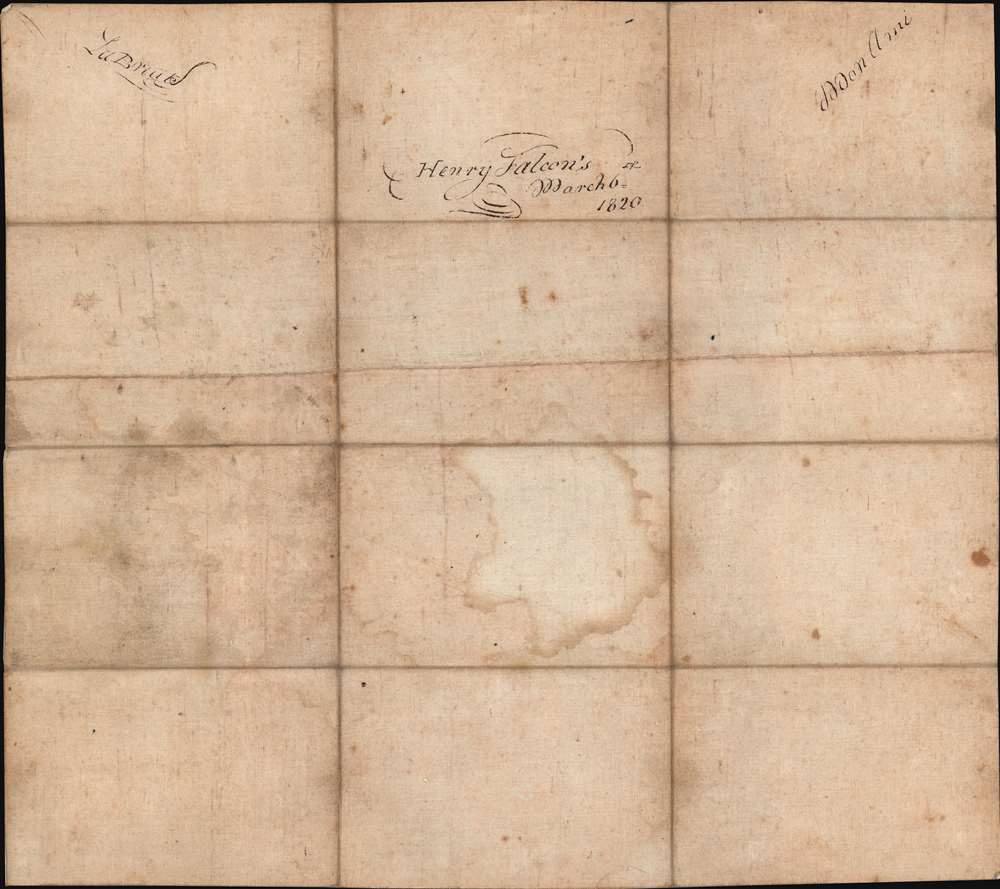 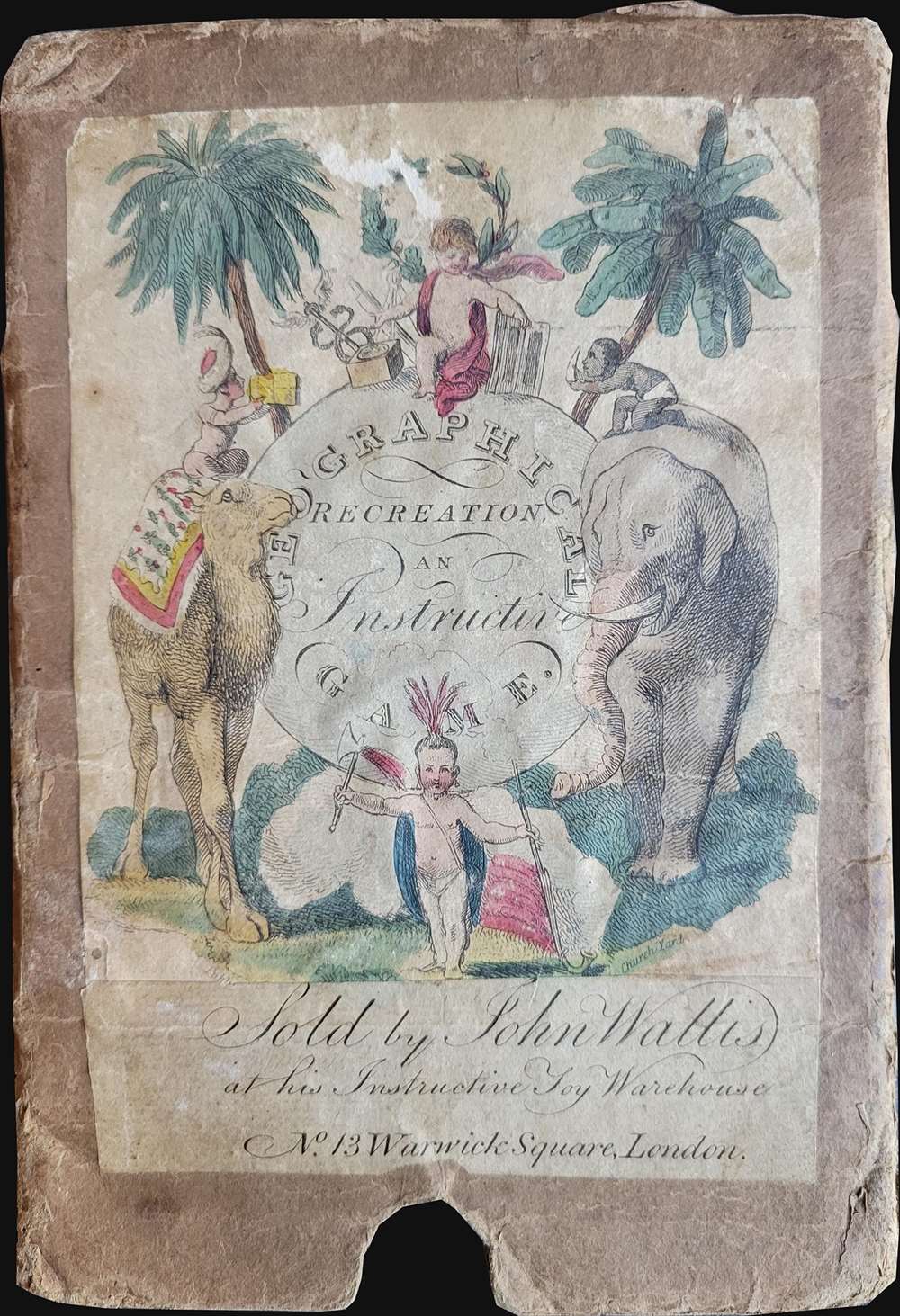 A different take on a classic game, this 1809 John Harris map game of the world takes players on a journey through the British Empire. Divided into four quadrants (Asia, the Americas, Africa, and Europe), players move along concentric rings filled with 116 circles. Each circle bears a vignette of something encountered by players on the journey around the world. One such circle bears the death of Captain James Cook. Britannia appears in the middle, with personifications of Africa, Asia, and the Americas fawning over her. Slightly larger circular vignettes present maps of the continents.

Per Tina Young Choi in her book Victorian Contingencies: Experiments in Literature, Science, and Play, Geographical Recreation, or A Voyage Round the Habitable World

offered a variation on the spiral structure found in The Mansion of Bliss, as it led players through the four quadrants of the British empire. Its surface, while circular in design, does not correspond to a flattened projection of the globe; instead, the board incorporates maps only as small insets, for reference, and geography is instead conveyed primarily through exemplary images or vignettes, each depicting an experience loosely associated with a particular geographical region. Reading or reciting the corresponding explanatory narratives from the paired booklet lent an education element to play, but these, too, adhered to a more traditional emphasis on moral hierarchies; setbacks in this game occurred through encounters with violent natives or supposedly heathenish customs, such as when travelers see the stone 'idols' at Easter Island.

This game was created and published by John Harris in 1809. The present example was sold by John Wallis and is signed in the verso by of one of its owners, a Henry Falcon, and is dated March 6, 1820. We note eight examples spread across five OCLC entries, which are part of the collection at Yale University, Stanford University, The British Library, Princeton University, the University of Delaware, the University of California Los Angeles, New York University, and the Library of Congress.

John Harris (1756 - 1846) was an English children's book publisher active from the end of the 18th through the mid-19th century. He worked as an apprentice for Thomas Evans and then worked for John Murray for a short time and then moved to John Newbery's publishing house. Harris bought the Newbery firm in 1801 and renamed it using his own name. Newbery had focused on Evangelical material, but Harris recognized that lighter, more playful items sold better. He published The Comic Adventures of Old Mother Hubbard and Her Dog in 1805, firmly departing from Newbery's original business model. Harris also included copperplate illustrations on every page, another departure from Newbery's sparse use of woodcut illustrations. Harris continued to publish amusing and entertaining books, many meant for children. He had a catalog of 419 titles by 1809. He renamed the firm J. Harris and Son in 1819 and turned the firm over to his son in 1824. Griffith and Farran bought the firm in 1843. Learn More...


John Wallis (1745 - 1818) was a London map seller, publisher, and maker of puzzles and board games active in the late 18th and early 19th centuries. Wallis studied mapmaking under the stationer William Johnson, with home he was apprenticed from about 1769. Upon his release from apprenticeship he partnered with one "Stonehouse" to found the short lived imprint "Wallis and Stonehouse". The firm lasted but two years before Wallis declared bankruptcy in 1778. Wallis subsequently started another independent firm specializing in children's books, games, and puzzles. In advertising ephemera issued c. 1812, Wallis claims, falsely, to have invented the puzzle map (this honor in fact goes to either John Bowles (1759) or John Spilsbury (1767). In 1813 he partnered with his son, Edward Wallis, to found Wallis and Son, which proved, primarily under Edward's management, exceptionally successful. Wallis's cartographic corpus is significant, including many important Revolutionary War ears maps of the Americas, as well as various pocket and dissected maps of London, Westminster, and environs. Upon his death, Wallis passed his business on to his sons, Edward Wallis and John Wallis, who operated separate but successful firms. The Edward Wallis firm is considered the direct successor to John Wallis, and the John Wallis II firm a new and completely separate establishment. Learn More...

Very Good. Dissected and mounted on linen in twelve (12) panels. Some soiling. Signed in ink by owner on verso.