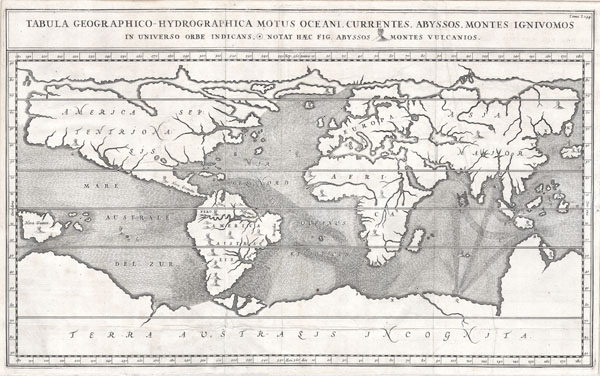 A rare and spectacular 1665 map of the world by the extraordinary Germany scholar Athanasius Kircher. This is most likely the first world map to depict the oceans currents. Shows the entire world in accordance with Kircher's hydro-geographic theory that tides and currents are caused by water moving to and from a massive subterranean ocean. Kircher postulated that water entered and exited the subterranean ocean via a number of great abysses situated around the globe. This map expounds on Kircher's theories by noting the abysses and the currents they create as well as the locations of the world's known volcanoes. Between the Mediterranean Sea, the Black Sea, the Caspian Sea, and the Persian Gulf, Kircher theorized massive tunnels and a complex interchange of water flows. These tunnels are noted most particularly between the Black and Caspian Sea and between the Mediterranean and the Persian Gulf. Antarctica is shown along the southern part of the map. In the North a great open northwest passage is depicted running all the way across the map. Shows New Guinea and a suggestion of Australia attached to the 'Australsis Incognita' mainland. Africa is shown with considerably greater accuracy than many maps drawn hundreds of years later – particularly with regard to Niger and Nile River Systems. North America and South America are both wildly malformed, indicating a relatively sketchy knowledge of the continent. Korea is shown as an Island and Japan appears as only a single island.