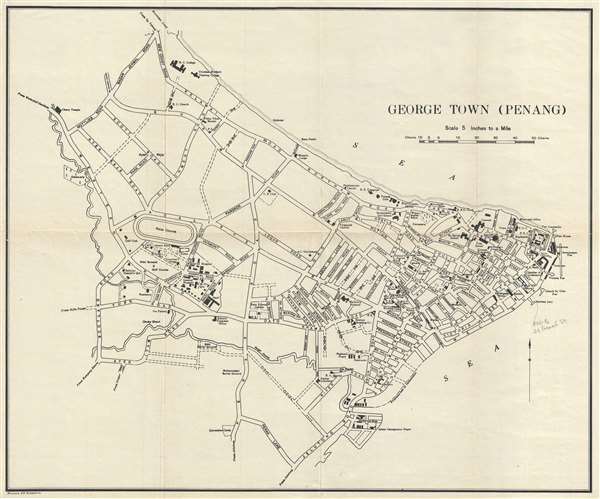 A very uncommon 1933 map of George Town or Penang, Malaysia issued in Singapore by Printers Limited. The map focuses on the peninsula of George Town east of Scotland Road (Jalan Scotland). Streets, districts, rail lines, both proposed and extent, golf courses, and more are noted.

Established as a trade entrepôt by Francis Light of the British East India Company in 1786, George Town was one of the first British settlements in Southeast Asia. Together with Singapore and Malacca, George Town was governed under the Straits Settlements, which became a British crown colony in 1867. Today it is Malaysia's second largest city. The historical core of Georgetown is a UNESCO World Heritage Site.

This map was issued in Singapore by Printers Limited to accompany the Singapore and Malayan Directory of 1933.

Printers Limited (fl. c. 1879 - 1940) was a Singapore based printing and publishing company active in the late 19th century and first half of the 20th century. Printers Ltd. provided a range of commercial lithography and printing services ranging from business stationary, to custom account books, to lithography. Among other projects, they issued the Singapore and Malayan Directory. Their offices were at 10 Collyer Quay, and their printing works on Trafalgar Street.

The Singapore and Malayan Directory of 1933, (Singapore: Printers Limited) 1933.